The First Artist to Come To Mind Game


Okay we are going to try an interesting game this time around.  Every comic reader has that one creator’s vision of a character that is the version they picture when they hear the character’s name.  So what we are going to do is list some characters and each list what artist’s interpretation we picture as our essential version of that character and why we chose it.  Basically the first artist that comes to mind when we hear the names.  We got this idea from an episode of the iFanboy Pick of the Week podcast.  So let’s see how this turns out.

Ted’s Pick-  Olivier Coipel.
I chose Coipel because the first major arc of Thor that I read was his run with J. Michael Straczynski that came out in 2007.  While I am a big fan of the Simonson run and recognize how iconic it is.  I just feel that the redesign that Coipel brought to Thor’s look was a lot more dynamic.  For example the choice to use the core of Thor’s tunic and cape look with the full sleeve armor underneath gives Thor a more battle ready look. 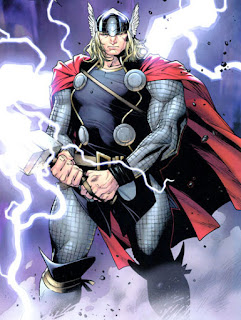 Tony’s Pick - Olivier Coipel
I know I’m probably disappointing our readers by not coming up with a pick that is unique from Ted’s, but I just can’t.  On his insistence, I read the JMS/Coipel run just as it was concluding and I was blown away.  In the past, I haven’t been much of a fan of fantasy or cosmic settings in my Marvel comics.  But this was so good, there was no way I could turn my nose up on this and forget about it.  Coipel continues to be the gold standard for Thor artists in this modern era.  That’s high praise, indeed, when you consider his successors have been Esad Ribic and Russell Dauterman.  Either one of them would be fine picks as well.

Ted’s Pick-  Alex Maleev.
This is an easy pick for me.  Alex Maleev has the perfect art style for the dark gritty nature of Daredevil.  Daredevil runs the rooftops of Hell’s Kitchen at nights and battles at a very street level.  And Maleev brings it to life with his rough yet beautiful style that plays heavily on the shadows in an image. 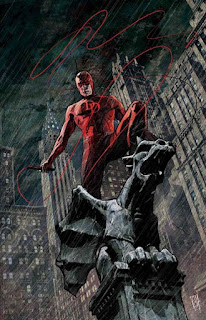 Tony’s Pick - Chris Samnee
When Ted and I were kicking around the idea of doing this article, we started with him picking a few characters, then I’d add my thoughts to the characters he brought up, then I’d punt it back to him with a few characters of my own until we feel our article is mature enough to publish.  This was the biggest surprise in our first go-around.  Maleev is a great choice, but I wouldn’t have guessed that he’d go in this direction in a million years!
A common theme you’ll see in this article is we’ll gravitate to artists that were on the character when we were first exposed to them.  And that is why my pick is Chris Samnee.  I’ve known of Daredevil for years, of course, but Waid’s run had so many wonderful artists such as Paolo Rivera and Marcos Martin.  When he finally settled in with Samnee as his artist, the book went to a whole new level.  He was quickly being credited as a co-collaborator, so he and Waid must have really clicked in hashing out story ideas together. 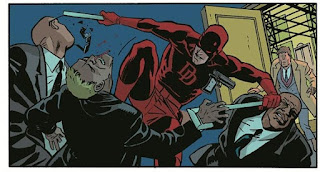 Ted’s Pick-  Bruce Timm.
When it comes to Batman this is the only option.  I watched The Animated Series almost everyday after school for most of my teenage years.  So even though there are more iconic interpretations of the comic character the Bruce Timm animated series Batman is the first to jump to my mind when someone talks to me about the Batman universe. 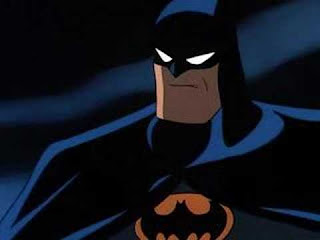 Tony’s Pick - Kelley Jones
Another incredible pick by Ted and one that could not be argued.  If you look at any of our other articles and reviews, you’ll know I have a huge blind spot with DC.  I just find their books very compelling to read month after month, with exceptions here and there.
But back in the day, I couldn't resist Elseworlds books.  Batman & Dracula: Red Rain was the first in a trilogy of books that pit Batman against the lord of vampires.  I was so enamored with Jones’ interpretation of the dark knight.  He had comically long ears on his cowl, a jaw that looks like it could take a hit from a Mack truck, and a cape that would give even McFarlane some serious cape envy.  It was so ridiculous and would be so counterproductive for the needs of Batman as brawler, but it was so stylistic and it really caught my eye. 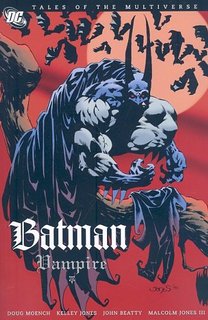 Ted’s Pick- Marc Silvestri
I think I picture Silvestri’s Wolverine because my favorite arcs have all featured his art.  Silvestri doesn’t try make Logan any more than he is.  A flawed man with anger issues that is trying to find where he belongs and who he really is.  Normally it takes the writer to make those emotions come across clearly, but if you were to remove the words from a Wolverine book drawn by Silvestri all of the emotion and actions of Logan would still be perfectly clear. 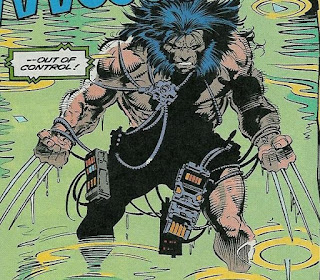 Tony’s Pick - Marc Silvestri
I’m in complete agreement on this one.  Wolverine #31 was the first comic book I ever bought for myself, so he’ll be forever cemented as my definitive Wolverine artist.  The only other artist that comes close, in my opinion, is Adam Kubert.  Silvestri’s style was so perfect for the tone of the character and for Larry Hama’s scripts.  It was beautiful, but rough at the same time.  He did such a masterful job capturing the duality of Logan--feral and ferocious, on one hand, and honorable and loyal, on the other. To this day, I still consider him one of our finest artists and I wish he was as prolific as he once was.

Tony’s Pick - Whilce Portacio
Portacio’s Hulk stuck with me after all these years for the same reason Kelley Jones’ Batman appealed to me--it was such a visually stunning and unorthodox interpretation.  His Hulk was massive and I mean really MASSIVE!  And instead of a tiny coif of hair on top of his head, like he was depicted by Gary Frank or Dale Keown (both amazing Hulk artists in their own right), it was long and unruly.  It gave the character a wildman, beastial look that seemed so fresh at the time.  Portacio has always had a gift for extremely exaggerated, but believable, anatomy.  This was no exception his musculature was absolutely huge, but you believed a gamma irradiated beast would probably look like this.  He drew the character during the Heroes Reborn stint of Iron Man.  His cover for Iron Man vol. 2, #2 will always stick out in mind as a perfect single image of what a force of nature the Hulk truly is when he’s pissed! 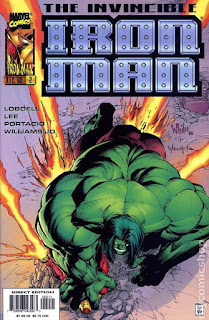 Ted’s Pick - Lenil Francis Yu
When I hear the name of the Hulk my mind immediately goes to the Ultimate Wolverine Vs. Hulk series and the way Lenil Francis Yu brought the big green guy to life.  He brings an asian influence that breathes new life into the character.  Plus anyone who can make a panel of Hulk ripping Wolverine in half look beautiful deserves to be recognized. 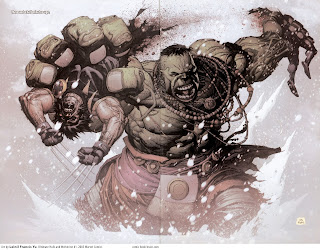 Tony’s Pick - Rob Liefeld (just kidding), Ron Garney
Another example of Mark Waid being paired with an artist that so perfectly renders his vision of the character.  Their run of Captain America was like a fun action movie.  The pace was quick and the action on the panels just flowed with so much energy.  Garney’s style has evolved somewhat since he did this book, but it’s still just as enjoyable.  He drew Captain America like you always expect him to be drawn, lantern-jawed and larger than life.  Some of the panel layouts are truly a sight to behold and really have to be experienced by every reader.  As a side note, if we had Sharon Carter on this list, I’d list Garney again.  Nobody, and I mean nobody, has drawn a better Agent 13. 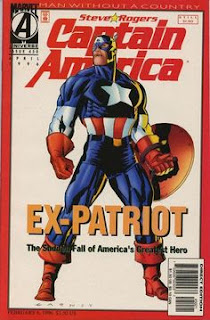 Ted’s Pick- Ron Garney
This is an easy choice for me.  The first Captain America books I read were Operation  Rebirth and Man Without a Country, so the Captain America that Garney presented in those stories will always be the first image that comes to mind when someone talks about him.  It should probably be mentioned that I borrowed those trades from the other person on this article.  And I believe Garney’s hold on the character was only cemented further when he worked on the Ultimate Captain America mini with Jason Aaron.

Ted’s Pick- Mike Deodato
Deodato’s interpretation of the infamous Marvel villain has stuck with me from the first time I read the first issue of Dark Avengers.  Deodato has a great art style that sticks out above most other artists.  But above all Deodato draws Osborn to look like Tommy Lee Jones with red cornrows.  This makes his take on the character the easiest to tell apart from all other artists when it comes to Norman Osborn. 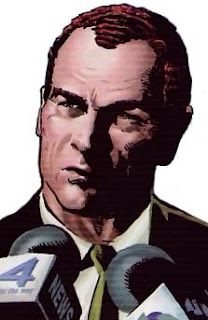 Ted’s Pick- John Cassaday
I have always been a huge fan of Colossus since first encountering the X-Men arcade game at a young age.  But as far as the first image that comes to mind when I think of the character it is all about John Cassaday and the way he handled Colossus in Astonishing X-Men.  I like his style so much I actually own a couple copies of the issue with Colossus and Kitty on the cover. 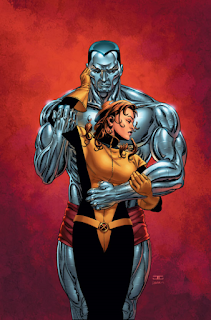 Tony’s Pick - Paul Smith
When I picture Colossus in my mind, I always picture Paul Smith’s version.  His Colossus was still young and so full of hope, wearing his classic, and now iconic costume, that consisted of knee high boots and flared shoulders. Smith’s lines are always so clean and lovely.  A truly wonderful art style. 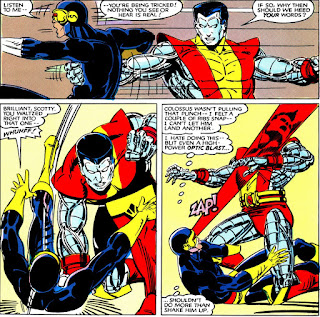 Ted’s Pick- Jim Steranko
The first time I saw an image of the original Nick Fury was on one of the many iconic covers Steranko did in the late sixties.  The character of Nick Fury may have been created by THE Jack Kirby, but in my eyes he was made truly iconic by Steranko.  Steranko may not have had a long run on the Nick Fury: Agent of S.H.I.E.L.D. title but his influence has been present ever since. 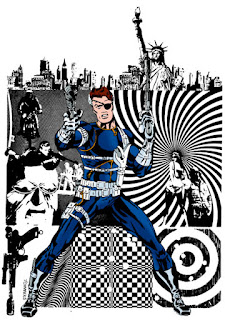 Tony’s Pick - Goran Parlov
Much like my Silvestri pick for Wolverine, Parlov’s style was perfect for the tone of the character that he’s bring to life.  Fury: MAX vol. 2 was the kind of war story that I love reading--the kind that didn’t really glorify war, but wanted you to know that there’s really no winners in war.  Parlov’s Fury is gritty, flawed, and tragically one-dimensional.  Fury was a soldier who needed a conflict to justify his existence.  Without a war, he was just a rudderless mess of a man who didn’t know how to function in peacetime. 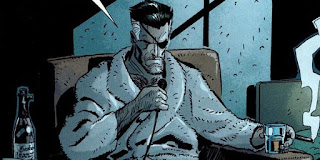 And that is where we will leave off for this article.  But there may be another installment later on down the road.  I hope you enjoy this as much as we enjoyed writing it.  And most of all Keep Reading Comic Fans.
Posted by Unknown at 12:10 PM