In the time that I have been reading comics I have noticed that a lot of comics seem to mishandle relationships on a regular basis.  Often using them as nothing more than a plot point for cheap emotional moments.  Like Carly Cooper leaving Peter Parker after she discovers that he is Spider-man.  But there are a golden few that manage to get relationships right.  Even if those relationships aren’t always perfect.  But I ask.  Is a relationship ever perfect.


Strangers In Paradise by Terry Moore- 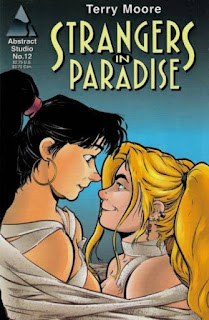 When the book centers around an unconventional love story between two friends that goes on (and off) for many years, the love story can’t afford to be bad.  Strangers In Paradise focus’ on Francine and Katchoo who meet in High School and spend many years afterward revolving around each other.
What makes the relationship in SIP so good is that both Francine and Katchoo are awkward and flawed in most aspects of their lives.  It is clear that they love each other but they get in their own way more often than not.  It is the flaws that make their relationship feel so real. 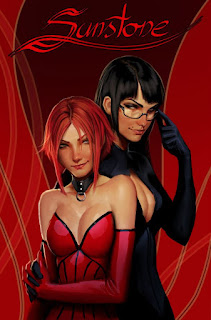 
Sunstone centers on Ally and Lisa who going into the book have no prior experience with same sex relationships.  But when they agree to finally meet and begin to experiment with the bondage they are both into a bond grows between them and soon it is pretty clear that they love each other.  Some of the shining moments to the series are the awkward moments between Ally and Lisa as they try to come to grips with who they are and who they were before.  For example neither of them can seem to keep their nerves in check as their inevitable meeting approaches.  The moments read like a couple of teenagers trying to admit that they have feelings for each other. 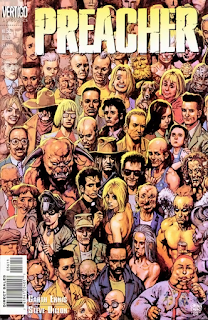 Preacher is many things.  A Western, a Buddy Road Trip Story and even a sprawling tale of a Man’s Crisis of Faith.  But at the it’s heart it is one of the greatest love stories ever told.  Neither Jesse or Tulip are perfect by any stretch of the imagination, in fact they are both rather broken people.  But that is what makes their relationship work.  They are two broken people who complete each other and as the story unfolds Jesse and Tulip are forced to fight their own instincts most of the time to make it work.  It is the faults of the two that make this relationship so perfect.  But even through “death” their relationship survives.


Thanks for reading my article.  If you have any questions, comments, or suggestions for more articles please leave them in the comments section.  And as always…. Keep Reading Comics Fans!!!
Posted by Unknown at 2:00 AM