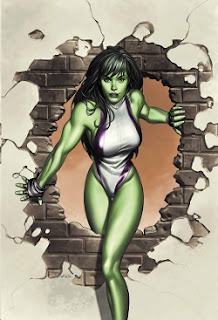 I haven’t read a whole lot of She-Hulk books but have constantly heard good things about this particular run from my best friend and co-founder of OnceUponALongbox.com Tony.  So when he gifted me a subscription to Marvel Unlimited I added it to my queue pretty quickly.  And I have to say that the hype was true.  Dan Slott and the artists he works with on this series put together a fun series for a character that is easy to write off as just being boring and derivative.


The series focus’ more on the life of Jen Walters and her insecurities with being just herself after she is kicked out of Avengers Mansion and is fired from the law firm she was working at.  But with every door that closes another is opened, and she is offered a better paying job with a bigger firm as long as she promises to stay as Jen Walters and not She-Hulk.  What she doesn’t realize is that she is also being hired to work in a special division of the law firm that specializes in superhero related cases.


the true shining point to this though is watching Jen try to find value in herself when she is so used to being She-Hulk as a way to hide her insecurities.  But there are other highlights in a side story involving Constrictor sueing Hercules for beating him up while stopping him and the rest of his team from robbing a bank, and Jen being recruited by an intergalactic court to help rule on cases while the original “judge” is away.  Not to mention the usual fourth wall breaking moments that add an extra level of charm to the book.  The best example being how her firm uses comics as evidence in their cases.


My only issue with this run is that there are events that occurred in other books that have an effect on Jen and She-Hulk both aren’t really tackled properly, but instead are just mentioned in an offhanded way.  For example when she is controlled by Scarlet Witch and kills the Vision.  I felt that Slott should have run with the after effects of the event on Jen’s conscience.


The art for these 12 issues was amazing.  starting with the more cartoonish style of Juan Bobillo that brings a fun angle to some of the heavier themes at the beginning.  And followed by Paul Pelletier, who does some of the best art I have seen from him.  Both are different styles and make the book their own while they are on art duties but it still has a great continuity over the series as a whole.


I highly recommend this series to anyone who hasn’t read it.  And I can’t wait to read the second volume of Slott’s run.

Thanks for reading my review.  If you have any comments, questions, or suggestions for other books to read.  Please leave them in the comments section.  And as always.  Keep Reading Comics Fans!!!
Posted by Unknown at 11:02 AM