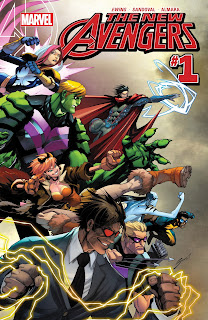 
I have had problems reading Avengers comics for a while now.  Either due to a big event derailing it or because the writer was going a little too high concept so the book wasn’t paying off by the issue.  But when I saw the team of characters that are in the New Avengers I figured I might give this one a chance.


New Avengers brings together several characters that I really like.  In this volume the New Avengers are made up of Hulkling, Wiccan, Squirrel Girl, Songbird, White Tiger, Power Man, Sunspot and Hawkeye.  But it is unclear if Sunspot is just the financial leader or if he will be part of the mission team at some point.  But in this issuer he is merely a face for the company that runs the team A.I.M. (Avengers Idea Mechanics) from their island base.  However the island is also home to many scientists that are working on ways to improve the world through science.


I was first introduced to the writing of Al Ewing when he worked on Mighty Avengers and Loki: Agent of Asgard.  With his Mighty Avengers run I only read a couple of issues before I dropped it because of how tied up in the Infinity event and the bad art of Greg Land.  With Loki I have read all of the issues and really enjoyed it.  In New Avengers Al Ewing is in top form.  He clearly likes working with the characters he is writing and knows how to make the large group of misfits on the team work together in their own unique ways.  Ewing manages to find a good balance of drama and humor that makes me want to get the next issue when it comes out.


Sandoval’s art bothered me at first but as the issue went on I found it growing on me.  It is very anime inspired and uses heavy lines for shading.  At about the halfway point I really started to feel that his art was perfect for the tone of the book.  The characters are all slightly re-imagined but at the same time they are easily recognizable.  But best of all is Sandoval’s ability to make the story flow without needing the words on the page. 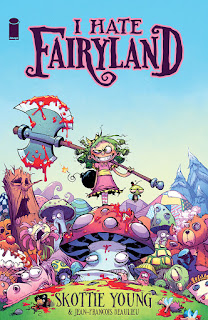 I Hate Fairyland #1
Written and Drawn By Skottie Young

After all of the variants for Marvel that Young has done it is easy to be burned out on Skottie Young’s art.  But I choose to remember his amazing work on the Oz series.  So when I first saw the solicitations for I Hate Fairyland I was pretty sure that I was going to be grabbing at least the first issue.


I Hate Fairyland is the story of a little girl named Gertrude who wishes to be swept away to a fairy tale land.  But she should have listened to the old saying “Be careful what you wish for”.  Because Gertrude gets her wish and finds herself in a land of many strange fantasy creatures called Fairyland, and she immediately wants to go back home.  Queen Cloudia welcomes her and tells her there is a key that will get her back home and the quest to find it will only take a couple of moments.  So with a map and her new sidekick Larry, Gertrude sets off to find the key that will get her back home.  A quest that is still going twenty-seven years later.  So Gertrude still looks like a little girl, but inside she has aged every moment that she has been in Fairyland.  A fact that makes her very bitter and resentful.


The writing and the art of Skottie Young works really well.  However it is a little weird to see Skottie Young’s cutesy art when Gertrude is blowing the face off of the moon with canon or disemboweling and eating a group of mushroom men.  A fact that makes it more fun when she really starts to raise hell against the world she is trapped in.

Both books were pretty good but I think I will only continue to read New Avengers going forward.  I can see I Hate Fairyland getting old once the shock value wears off.  But I hope that there are people who keep reading and enjoying it.  But with New Avengers I will read it until it gets cancelled or gets derailed by an inevitable crossover event.


Thanks for reading my review.  If you have any comments, questions, or suggestions for other books to read.  Please leave them in the comments section.  And as always.  Keep Reading Comics Fans!!!
Posted by Unknown at 2:14 PM