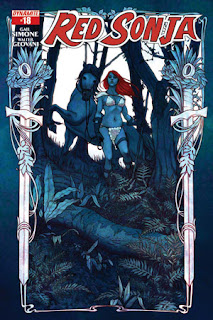 Last week the final issue of Gail Simone’s Red Sonja was released.  With all of the delays in the release schedule it was a longtime coming.  Admittedly I was slow on getting around to reading it but it was worth the wait.


With the final arc Sonja has to make the decision to stay and defend the sisters and their library from the queen’s men.  What makes the decision harder is the word that the queen is sending her toughest killers the Vipers, a group of three men that have exceptional skills and no mercy.  A fact that should make Sonja forget about trying to protect the sisters, especially since she doesn’t care about books at all.  But would it be Red Sonja if she didn’t fight a “losing” battle.


Walter Giovani is on point with his art as usual.  The line work is crisp and captures both the raw brutality and beauty of the characters and environments perfectly.  Whether it’s just a conversation between characters or Sonja fighting off the three Vipers, Giovani makes it all easy for the reader to follow.     The inker did their job perfectly.  By that I mean that you don’t notice a single line or shadow that they did.  and that is the job of an inker to enhance the art without being noticeable

Thanks for reading my review.  If you have any comments, questions, or suggestions for other books to read.  Please leave them in the comments section.  And as always.  Keep Reading Comics Fans!!!
Posted by Unknown at 9:16 AM