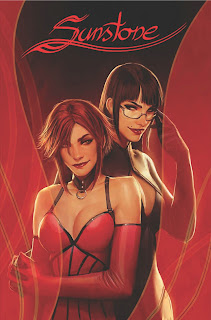 
Let me start by saying this is a very adult title, and when Tony first brought this series to my attention I agreed to read it thinking it was going to be a comic version of 50 Shades of Grey.  What I found when I read it is that Sunstone is a deep story about two women lost in life until they find each other.  However where Sunstone breaks the mold of the typical love story is that the two women have always been into BDSM.  And yes it is shown in graphic detail throughout the book,  But it never seems trashy.  The way that Sejic brings it all to the page with so much class and emotion.


Sunstone follows Lisa Williams who is a writer who has had proclivities towards submission almost all of her life, but was always afraid to let it come out until she met Ally Carter online.  Ally is a successful business woman who is a dominant who has been collecting the tools but has never found the right person to use them with.  Neither of the women have experience with a same sex relationship before they meet, but once the two officially meet in person it is clear that everything each of them have gone through was just preparation for their inevitable meeting.  And once they take the plunge into their roles in the relationship it is clear that they are a perfect match.


As I stated before the subject matter could be uncomfortable to the reader.  But there is something about the way it is portrayed that makes it beautiful to see.  Most of the events of the first volume take place over a single weekend that they spend together.  And at the end when they go their separate ways for the work week both Lisa and Ally immediately seem uncomfortable in their own skin again.


Rating: 4.5 Out Of 5
I have the second volume to read but haven’t read it yet because if it’s anything like the first volume I won’t be able to put it down till it is done.  And that is something I haven’t felt about very many other books

Thanks for reading my review.  If you have any comments, questions, or suggestions for other books to read.  Please leave them in the comments section.  And as always.  Keep Reading Comics Fans!!!
Posted by Unknown at 4:43 PM