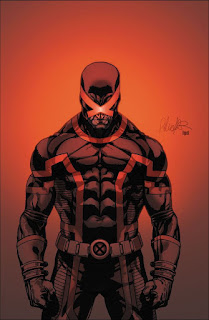 I have never really thought that cyclops has had a particularly great costume.  But in the aftermath of AVX Cyclops began wearing a costume that went to all new levels of being stupid looking to me.  Given it isn’t a big difference from his typical costume but the one major difference is exactly what makes it look so bad.  And that change is the normally basic visor was changed to this weird looking X shaped visor that makes no sense visually or practically to his powers.

Another Costume that wasn’t really great from the start but was later redesigned to be something much worse.  Cosmic boy originally wore a costume that was pink with sides, gloves and boots.  but then for some inexplicable reason Mike Grell decided to change the costume in the late 70’s so that all of the pink became bare flesh.  A look that gave the impression that Cosmic Boy was wearing a piece of black lingerie with black elbow length gloves and  knee high boots.  And just like that cosmic boy goes from looking a little weird to looking like he is on his way to a bondage party or something.  I just wonder what they were thinking allowing the costume change. 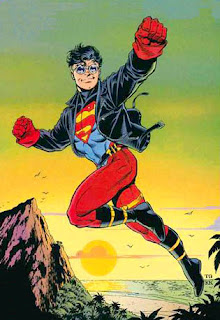 This particular costume makes the list for the fact that it is extremely stuck in the 90’s.  Made up of a red and blue body suit with the typical S logo on the chest, a short leather jacket and the very 90’s circular sunglasses.  The original Superboy costume was debuted along with the Kon-El character during the Rise of the Supermen story in 1993.  Fortunately for Kon-El he got a redesign in the 2000’s to his much better look of jeans and a black shirt with red S logo.  But sadly it can never be erased that he was stuck in the 90’s for a long time. 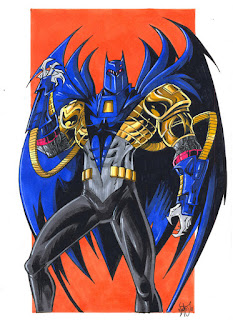 Long before there was an Arkham Knight or even the armored Batman costume of Jason Todd from Battle for the Cowl there was Azrael running around in one of the most unnecessary armored Batman costumes.  While Bruce Wayne was sidelined with a broken back Jean-Paul Valley took up the mantle of Batman to keep the streets of Gotham safe.  But as Valley went on he began to lose his sanity which would lead  him donning one of the most hideous suits to ever grace the Batman title.  it was comprised of a bright yellow armor underlay with dark blue armored boots, helmet and  silver gloves with long clawed fingers all over the top of what looks to me like a black spandex bodysuit.  I have noticed that newer younger readers like my nephew really like the “Cool Armored Batman”, but with respect to those people.  It’s a terrible costume.  But in the case of my nephew I look at it as being a doorway into finding much better characters.  So to each their own. 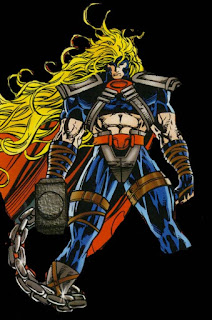 This one hurts me personally.  In the 90’s shortly after the Walt Simonson run had ended Mike Deodato took over the art duties and redesigned Thor with a new “edgier” look.  To me the new look is mind blowingly bad.  Given it was done in the 90’s when all of the characters were being given what I call the “Image” treatment.  Thor went from wearing his original Asgardian costume to wearing a strange combo of blue spandex pants and belly shirt with small armored patches and all kinds of useless straps.  Not to mention his ridiculous new hairstyle.  Thank god the look didn’t last too long. 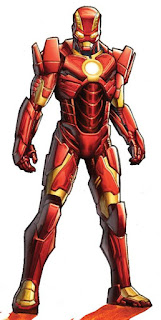 I am sure there are people who liked this particular armor that Stark wore when he was teamed up with the GotG.  But in my opinion it looks pretty out of place.  It is probably the fact that the helmet makes him look kind of like an alternate colored Ultron rip-off.  He doesn’t even remotely look like Iron Man to me.  But I also have a bad taste in my mouth that Marvel decided to shoehorn him into Guardians of the Galaxy in the first place.  It made it feel like they had no faith in the title.  And then they put him in a strange new armor in an attempt to make him look cooler. 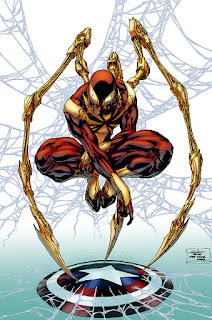 When Spider-Man joined the pro-registration side of the Civil War, Tony Stark gifted Peter Parker with a brand new costume.  That costume was a armored version of the Spider-Man costume with an Iron Man color scheme.  And let’s not forget that the suit had four mechanical arms attached to the back much like the Superior Spider-Man costume that would come later.  The part that bothers me the most about this costume is that it was Iron Man’s colors.  Why?  Just because Stark created it, doesn’t mean it had to be in his colors.  I don’t know if the costume would have looked better in the traditional red and blue, but at least it would have made sense.  There is a good thing though.  Peter Parker stopped wearing the armor after he switched sides in the battle.

Thanks for reading my article.  If you have any questions, comments, or suggestions for more articles please leave them in the comments section.  And as always…. Keep Reading Comics Fans!!!
Posted by Unknown at 8:59 AM