Most Shocking Deaths In Comics


Every now and then a character comes along in comics that finds a special place to anyone who reads the book they are in.  And sometimes after reaching that special place that character will die a sudden gruesome and shocking death that makes what he or she stand for even more special.  while at the same time shocking anyone who happened to be reading with their sudden death.  Because “Why would the writer ever kill such a great character that means so much to the book and it’s readers.”  This is a list of the deaths that were the most shocking to me. 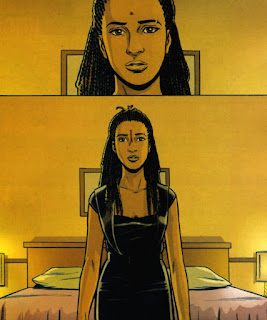 When 355 is first enters the life of Yorick Brown she is investigating the stories of a man who survived the event that wiped out everything with a Y chromosome.  Upon finding Yorick 355 promises to protect Yorick to help him find his girlfriend as well as try to figure out why he was the only survivor.  But before long 355 becomes Yorick’s closest friend.  But after finding his girlfriend and realizing she was going to break up with him before the phone went dead, and seeing the person she really is.  Yorick finally admits that 355 is the true love of his life.  So he returns to the hotel room that 355 was waiting in to confess his true feelings, and the perfect happy ending is coming into view.  But just as Yorick and 355 are preparing to leave together to start their new lives together, 355 is shot by the head of an elite Israeli military unit that wants to capture Yorick.  The death of 355 comes out of nowhere.  And just as it appears that Yorick is going to finally get his happy ending with the only woman left on Earth who truly loves him.  And her death destroys Yorick so much that he spends what is left of his life with only his monkey Ampersand.

Glenn In The Walking Dead- 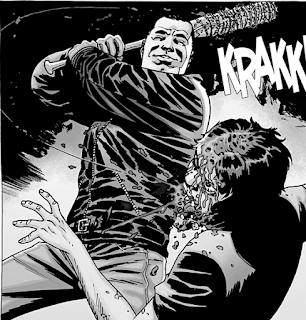 Glenn is the one person who never seems to give up hope for the survivors of the zombie apocalypse.  He is always upbeat and willing to do what he can to help the group as a whole.  And as I read Walking Dead I remember thinking that Glenn is the character that will eventually take over as the leader of the group and even the focus of the series.  But in the 100th issue Kirkman through a massive curveball to all of the readers when Negan gruesomely beat Glenn to death with a baseball bat in one of the most graphic on panel deaths I have seen in awhile. 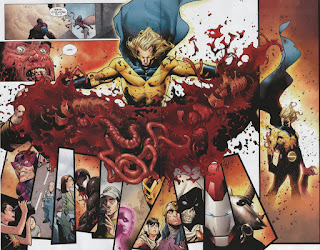 When Norman Osborn took over the U.S. government in Dark Reign he put together his own version of the Avengers.  So when it came time to fill the spot in the team for Thor he called upon Ares.  A longtime villain of Thor and Hercules, Ares now had a son and was trying to make the world better for his son’s future.  So he gladly accepted the position on the Dark Avengers.  And he never questioned an order given by Osborn until he told them they would be trying to take Asgard.  Ares immiediately voiced his concerns about facing the fellow gods of Asgard and warned Osborn that if he even senses that Osborn’s motives were false he would personally take Osborn down.  The only thing Ares didn’t account for was that Sentry was blindly loyal to Osborn.  So when Ares realized that Osborn was really up to he began living up to his promise, which made Sentry snap and give into his other side The Void.  And it wasn’t long until Sentry graphically ripped Ares in half on panel.  Even though I had heard about the death before I read the event it still shocked me to see it happen.


Headsman Is Shot By Scourge In Thunderbolts-

Headsman and Scourge became members of the Thunderbolts when Norman Osborn took power.  The Thunderbolts at the time were a black ops team designed to do the things that Osborn couldn’t be seen doing.  After a run in with the Agents of Atlas the Thunderbolt team is receiving their new orders from Osborn when suddenly Scourge pulls a gun and tries to shoot Norman Osborn.  But the problem is Osborn is only a hologram so the bullet goes straight through Norman and into the head of the Headsman.  It is then disclosed that during the battle with the Agents of Atlas a subliminal message was placed in scourge’s head to kill Osborn.  That shock of this one is that it is just such a sudden thing.

Fisk Lets His Son Be Murdered In Punisher Max- 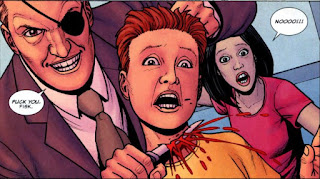 When Jason Aaron took over Punisher Max he began telling the last Punisher story.  And it all began with a mob enforcer named Wilson Fisk putting his plan to to run the New York mafia into motion.  The problem is, Fisk betrays the heads of all of the families on his way to being the head of New York.  A fact that leads to some of the former bosses to show up at Fisk’s home to get back their money and status.  It all leads to a confrontation in the bathroom where one of the mob bosses has a knife to his son’s throat.  They tell Fisk that they won’t harm his son if he gives back everything they signed over to him to create the false Kingpin of Crime facade.  But Fisk refuses to and tells them to go ahead and kill his son.  So Fisk and his wife watch as the man cuts their son’s throat.  This is one of the most disturbing moments in the Punisher Max run.  And that’s saying something considering some of the other events that take place throughout the series.

Thanks for reading my article.  If you have any questions, comments, or suggestions for more articles please leave them in the comments section.  And as always…. Keep Reading Comics Fans!!!
Posted by Unknown at 8:56 AM