In the last decade there have been a lot of really strong movies based on comic books.  But I want to talk about the ones that I realize are not great, but I just love to watch anyways.  Now I know that some of the movies I have on this list are extremely disliked, but please just hear me out on this. 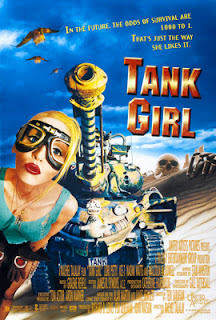 I never read any of the Tank Girl comics, but have always loved the eccentric feel to this nineties gem.  Lori Petty brings the titular Tank Girl to life with all of the crazy edge you would expect from a character who drives around in a tank with a humanoid kangaroo named Booga for a boyfriend.  And Malcolm McDowell plays the head of the evil corporation that controls all of the water in the devastated wasteland Tank Girl calls home.  And I must say that McDowell chews the hell out of the scenery.  All he needs is the handlebar mustache to twirl while he delivers his speech about his plans.  And you can’t forget the appearance of a young Naomi Watts in one of her first roles and Ice-T as the leader of the Kangaroo men T-Saint.

The Punisher (1989)
Directed By Mark Goldblatt 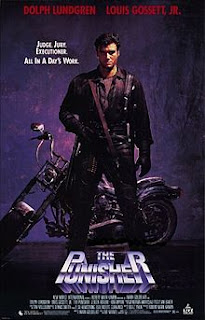 By far the least linked to the Punisher comics.  The ‘89 film starring Dolph Lundgren as Frank Castle probably has the highest body count and also is one of the most fun to watch just for how over the top it is.  Lundgren grunts through his lines and never fully gets across the pain that some of the later actors to play the character.  But man does he bring the best performance to the vigilante who will kill anyone who gets in his way to killing the people responsible for murdering his family.  The best part to the movie though is Louis Gossett Jr. playing Frank’s former partner who wants to save Castle before he is lost to vengeance forever. 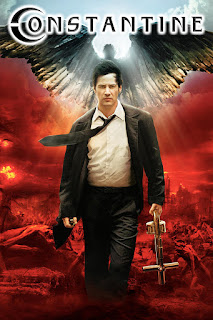 This movie gets a lot of hate, and I understand why.  Keanu Reeves was a horrible cast for the character of Constantine.  Now that said, I love this movie for what it is.  A fun action movie about the constant battle between Heaven and Hell.  And while he doesn’t do a good job as the Constantine of the comics he plays a fun movie version with his dry, monotone delivery.  Rachel Wiesz brings some legitimacy to the movie playing a doctor whos twin sister says Constantine’s name before committing suicide.  And the long list of side characters help to flush out the world that Constantine lives in.  Djimon Hounsou as the voodoo shaman Midnite, TIlda Swinton as the smug angel Gabriel, Gavin Rossdale as one of the slimiest demons ever Balthazar, and Peter Stormare as the devil himself Lucifer.  After reading the trade the movie was based on Dangerous Habits I realized just how much the movie fell short, but I still can’t help but watch this one when it comes on. 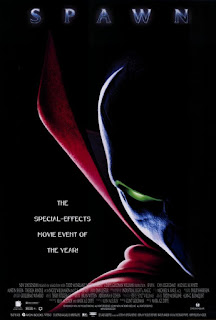 I saw this movie the day it came out in theatres.  I knew that the movie made Spawn way more of a hero then he was in the comics.  And that if the studio wanted to make it true to the way the comics were, the main the story would probably follow the two cops Sam and Twitch and not Al Simmons.  But even with all of those downfalls I still really love this movie for what it is.  And the cast is pretty strong too.  Michael Jai White plays Al Simmons/ Spawn a soldier that wants out of the business of killing, but is betrayed and killed by his boss.  So he makes a deal with Malebolgia to lead the armies of Hell if he can go back to earth to be with his wife again.  Martin Sheen plays the boss who betrays Al because Hell wants his soul.  But by far the star of Spawn is John Leguizamo as Clown, the demon that is left on Earth to be Al’s watcher.  Leguizamo was the true standout in Spawn.  He had a delivery that made all of his lines work no matter how cheesy they are. 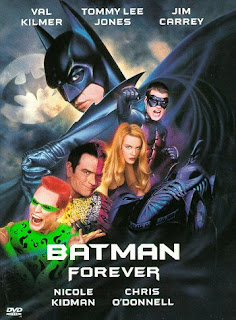 The first of the Schumacher Batman movies, Batman Forever was a better balance of the Tim Burton movies that followed it with the over the top wacky that got a little too much with Batman & Robin.  Starring Val Kilmer as Bruce Wayne and bringing in Chris O’Donnell as Dick Grayson, Forever doesn’t take itself too seriously.  Which is why it works so well to me.  And I always loved that there was never a mention to the fact that suddenly Bruce Wayne has blonde hair.   Then you get to the villains.  Jim Carrey as Edward Nigma/ The Riddler and Tommy Lee Jones as Harvey Dent/ Two-Face.  Both Jones and Carrey chewed the hell of the scenery for the full 90 minutes.  And Carrey really channelled the inner Frank Gorshin.  It was just a bonus that Batman Forever also features Nicole Kidman at the peak of her hotness.


Thanks for reading my article.  If you have any questions, comments, or suggestions for more articles please leave them in the comments section.  And as always…. Keep Reading Comics Fans!!!
Posted by Unknown at 3:59 PM