Review of Batgirl/Robin: Year One

I was given this trade awhile back, but have been slow to get around to reading it.  It came highly recommended by my fellow contributor at the Once Upon A Longbox, Tony.  I am not always a huge fan of DC, but the characters and creators involved are big draws in my eyes. 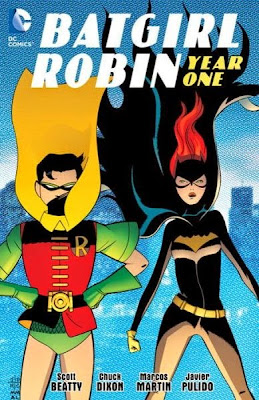 Batgirl/Robin:Year One
Written By Scott Beatty and Chuck Dixon
Art By Marcos Martin and Javier Pulido
Released By DC Comics


I will start with Robin: Year One which is where the trade begins.  The story focus’ on the first encounter Robin has with Two-Face after joining Batman’s battle with the corruption of Gotham city.  The narration is from Alfred’s point of view and presented as journal entries.  It is clear that from the beginning Alfred isn’t happy about Bruce taking on Dick as a sidekick, but he does notice a change in Bruce’s demeanor with the addition of the Boy Wonder.


The first part of Robin’s adventure features Robin facing off with the Mad Hatter who is abducting young girls for a mysterious client.  Dick is put onto the trail of the Hatter when he abducts a girl that goes to school with Dick.  But with Bruce out of town, He must tackle the case alone.  But the more he investigates the crime the deeper he finds the rabbit hole goes.   Robin manages to thwart the Hatter and save the brainwashed girls.  With a little bit of help from Bruce doing his drunken playboy routine.


With the Hatter recaptured and the girls safe.  Robin is renewed with confidence, in fact a little too much confidence.  So when Two- Face kidnaps the judge of the case that left Harvey scarred, the dynamic duo are called into action.  The problem is that Harvey laid a trap for them so he could get a chance to break Robin.  Two-Face gases both Batman and Robin and sets Robin up to have to choose between saving Bruce or the judge.  But Robin being young and still a little rough around the edges tries to save both men.  Which leads to the judge being dead and Batman having to watch Robin get brutally beaten by Two-Face with a baseball bat.  Though Harvey is taken into custody, the damage has been done.  Robin is in really bad shape, so Bruce decides to shelf Robin indefinitely.


Dick finds himself directionless without being Robin anymore.  He is lost being at the mansion, but not being allowed to be part of the team anymore.  So he leaves the mansion to find his own path.  A path that leads him to a man named Shrike who runs a group of teenaged assassins that he is training to make his own private army.  Dick joins under a false name and quickly gets a chance for revenge against Two-Face, when Shrike takes a hit on him and uses it as a test for his new recruits to prove their loyalty.  But will Robin go through with the hit?  If you want to know you are going to have to read it for yourself.


As For the Batgirl half of this trade.  It covers how Barbara chose to become a hero herself.  Growing up the adopted daughter of Commissioner Gordon, barbara just wants to serve for justice just like her old man.  But no one seems to think she can handle it.  Often telling her that she doesn’t even meet height requirements.  She even tries to get into law enforcement through her capabilities with tech.  After exhausting all possible angles she has to become a member of law enforcement barbara decides to attend the policemen’s costume party dressed as Batman.  Nobody at the party knows who she is, which makes it perfect when Killer Moth crashes the party for Barbara to step up and do what she always wanted to do.  Protect her city.


After stopping Moth, Barbara finds she really enjoyed it and wants to make a secret career out of it.  The problem is that neither Batman or Gordon are happy with the new vigilante in town.  Barbara starts buying better equipment for her new career path under the guise of computer upgrades and retrofits her costume to be better suited to take on criminals.  But she doesn’t know that Batman and Robin are both keeping a close eye on her.  And after their first encounter Batgirl reaches out to the JSA to help her train.  Which leads to Barbara having a quick run in with Wildcat who also tries to convince her to walk away.  But of course Barbara being the strong willed person she is, decides she is going to stick with it no matter what anyone else thinks.


Realizing that she is not going away.  Batman has Robin start to help Batgirl to see what she is really made of.  With new upgraded equipment in her possession thanks to Batman, Barbara continues to track Killer Moth, who has a new partner in crime in the extremely unstable Firefly.  Batgirl continues her game of bat versus bugs even getting a little unexpected help from the Black Canary and Robin at different times.


I felt the Batgirl half was much stronger than then the Robin half, but both were really good reads.  Scott Beatty and Chuck Dixon have a really strong grasp the characters that they are writing in these two stories.  The two writers on this book have found a perfect balance of strong emotional moments and a sense of humor.  And there are brief moments that make subtle allusions to who the characters will become.


As for the art,  Both Pulido and Martin deliver big time.  They both use a great style that feels like retro art from the days of their original first appearances.  But most of all this collection has some of the best Marcos Martin art that I have seen.  Throughout the Batgirl book it is like Martin is trying to one up himself with every panel.


Rating: 4.5 Out Of 5
This is a great read that I feel like everyone should check out.  It has a little bit of something for everyone.  And these two stories add to the mythos of both characters in a good way.

Thanks for reading my review.  If you have any comments, questions, or suggestions for the site, please leave them in the comments section.  And as always…. Keep Reading Comic Fans!
Posted by Unknown at 5:53 AM