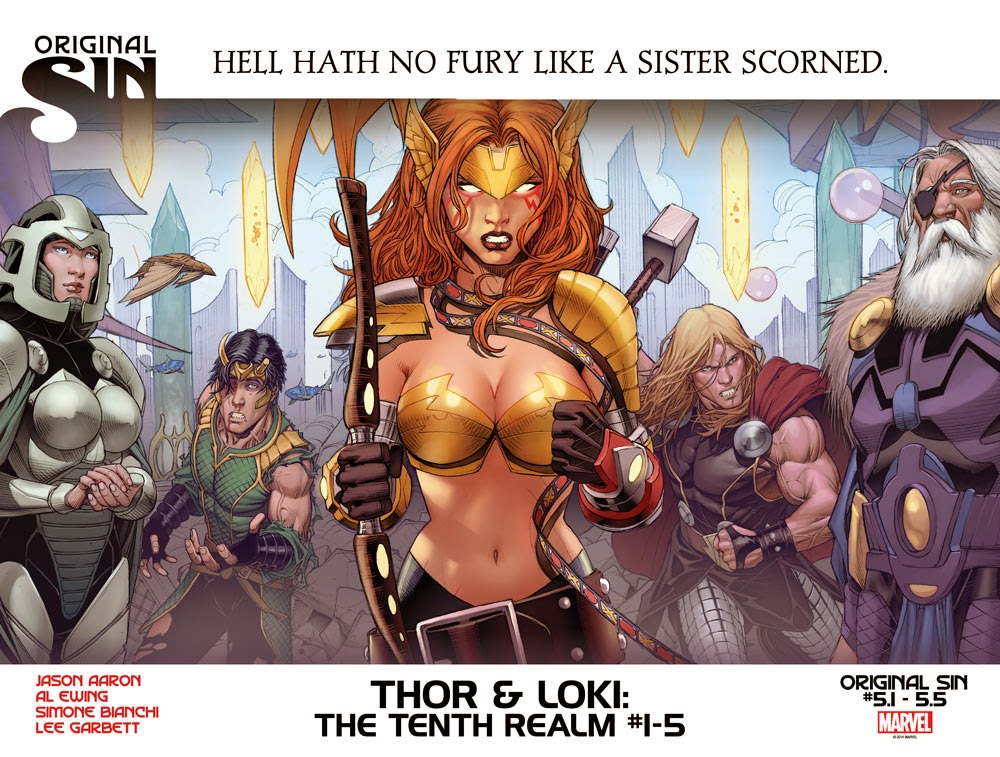 Welcome back readers.  This week I have a book that follows two of my favorite characters of the last couple of years.  Though this particular arc is a tie-in to one of Marvel’s many events that I had no real interest in.  However it did affect the status quo of the universe for them.  So let’s get down to business.


When Marvel announced that they were going to be making Angela an Asgardian I was a little upset.  When they said not only would she be made an Asgardian, but they were going to ret-con her into being the lost daughter of Odin I was furious.  But I still gave her book, Angela: Asgard’s Assassin a look when it came out.  It was the fact that her book was actually interesting and enjoyable that made me want to go back and read this story to see how everything fell into place.


During the events of Original Sin when all of the secrets are revealed Thor is at ground zero and gets flashes of a war from long ago with a realm that he doesn’t remember existing.  And most shocking of all a sister that no one ever told him he had.  This revelation leads to Thor leaving his Avenger brethren on the moon to confront his parents, and make them explain why they never told him of his sister.  And after a little pushing his mother Freya tells him the story of how his sister was murdered by the leader of the tenth realm of Asgard, Heven, at the end of a long bloody war between the two.  After the death of his daughter Odin is so enraged that he annihilates most of the angels of Heven before severing the connection between Heven and Yggdrasil the world tree.  But Freya swears that his sister is dead and begs his forgiveness for not telling him of the tragedy.


Unsatisfied with Freya’s information Thor decides he wants to find a way into the lost tenth realm and find the sister he knows is still alive.  So he goes to the one person who is sneaky enough to find a way in, Loki.  Of course as any other time that Loki is involved in a deal there are the questions of trust.  So Thor and Loki mount up Thor’s chariot and head to where Heven was severed from the world tree.  And with a little of Loki’s powers of trickery they unlock the magic barrier and reconnect Heven to Yggdrasil, and the other nine realms.


Once the door is open Thor and Loki enter Heven to find out the fate of his their sister.  While Thor and Loki enter the newly opened door, across the galaxy Angela is fighting alongside the Guardians of the Galaxy when she hears a sound beckoning her away.  So Angela takes a small craft and goes looking for the source of the sound, which leads her back to Heven where Thor and Loki are now fighting the Angels of Heven.  The Angels celebrate the return of Angela and after she destroys Thor in battle Angela is given the title of Mistress of the Hunt.  And on top of that humiliation, Loki sides with the queen of angels leaving Thor alone and imprisoned.


But Loki as always has another ace up his sleeve.  Or maybe I should say “her” sleeve.  Because when Loki joins Heven’s forces he once again takes the female form.  And as Loki leads the forces of Heven in an attack on Asgard.  What Loki doesn’t tell them is that they are launching an attack on Ancient Asgard, where Odin and his brother Cul the god of fear from Fear Itself are in an unending game to decide the freedom of Cul.  And once informed of the return of Heven Odin forfeits the game to go to war.


I will keep the details of the outcome to the story to myself incase you want to read it yourselves.  But I will say that Odin is surprised to find his daughter alive and the queen of Heven is shocked to find that she has an Asgardian in her inner circle.  This one story really does lay a lot of groundwork for what has followed in Angela: Asgard’s Assassin, Loki Agent of Asgard, and some points of Thor.


I still have no interest in reading the main book of Original Sin.  But I am glad I read this series.  Aaron and Ewing really collaborated well on this story.  It never felt that the characters personalities changed in even the slightest of ways.  And Angela was made into a much deeper character than what she ever was in Spawn to me.


As for the art.  Bianchi and Garbett made for an interesting collaboration.  When the story was taking place in one of the nine realms Garbett was the main artist.  But when it would jump to Heven, Bianchi’s art would take center stage.  This made it easy to understand where you were in the realms at all times.  My only complaint is that Bianchi’s art was a little rough at points and made for some of the characters looking very similar.  So it would make it hard to recognize who you were seeing every once in a while.

Rating: 4.5 out of 5
To me this trade was a must read for anyone who is a fan of the Asgardian Universe in current Marvel continuity.  And the history laid out for the problems between Heven and Odin was really well plotted out.

Thank you for reading my review.  If you have any comments, questions, or suggestions of other books to read or how I can improve my reviews please leave them in the comments section.  And as always… Keep reading comics fans.
Posted by Unknown at 3:38 PM