Last Wednesday I had a light week for new comics so I decided to grab some number 1 issues for series that had started recently.  The issues varied in publisher and genre, but all seemed pretty interesting from first glance.  But we all know the saying about judging a book by it’s cover.  So let’s get to the reviews. 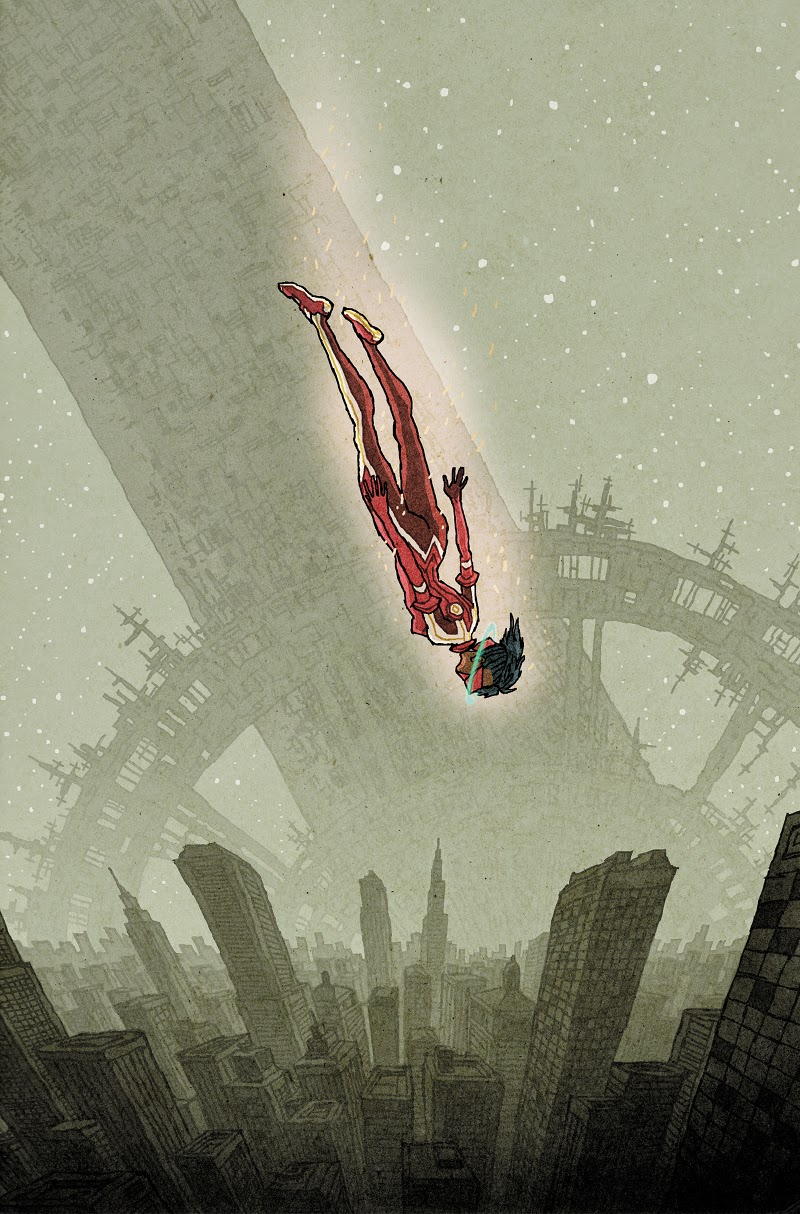 
Halogen takes place in the futuristic space station of Cityship Q.  It is a large station made up of two “conjoined twin cities”.  The upper side being where the upper class reside.  A regular utopia.  The lower side is more like Mos Eisley.  Dark and dirty and most likely filled with the unwanteds of society.   The body of a dead god named Det’Houva was found dead five years before the main story begins, and a corporation  named Securicorp has control of the body.  It seems that Securicorp has been mining the body with intentions of learning everything it can teach them.  Though it is never clear what they will do with the information.


The book is centered around a woman with a holographic halo around her head named Rell.  Rell is an information thief for a underground movement who wants the information that Securicorp has on the body of Det’Houva.  It is also never made clear what they want the information for.  But it almost appears that they worship the Det’Houva.


I wish could say I fully understood what happened in this issue and where it was going, but I got a little confused about halfway through the issue.  Which bothers me a little because the characters and world had a really interesting premise.


Afu Chan has a very interesting art style.  There are no other artists that I can to compare it to.  Chan uses a very loose form line that works for the world being brought to life.  I would like to see Chan work on another book to see how it translates.


Rating:  2 out of 5
I wanted to like this book a lot.  The concept was interesting, and the world felt lived in.  But it just felt like there was too many concepts and ideas jammed into the small space of the issue. 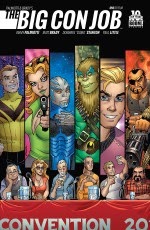 
The Big Con Job is the tale of a group of actors who are in the twilight of their careers.  They were all on a highly popular sci-fi show back in the day, but now they are on a constant rotation of the con circuit.  The problem is that as the years go on more and more their popularity wanes.


This book is definitely a darker version of the story shown in Galaxy Quest.  Minus the hatred between the former cast members.  But that doesn’t mean there isn’t some fun to be had.  For example the sexy female from cast is approached but it is clear the fan is only interested in getting a chance to look down her low cut tank top.  What really stood out to me though was the realness of the characters.  All of them have very real problems that make them feel like someone you would really run into at a con.  Like barely making rent or relationship problems.  But those problems lead to a couple truly heartbreaking moments.


The writing of Palmiotti on this book is on par with a lot of what makes all of his books strong.    He knows how to make a character you want to root for no matter what they say or do.  As for Stanton’s art.  It wasn’t horrible, but it also wasn’t perfect.  But I find I almost always feel that way about books that have a cover by Amanda Conner and interior art that is far from.  So I admit that I do possibly have a biased opinion.


Rating: 3 Out Of 5.
I most likely won’t grab the other issues of this series.  But when the trade is released I will be really excited to get a hold of it. 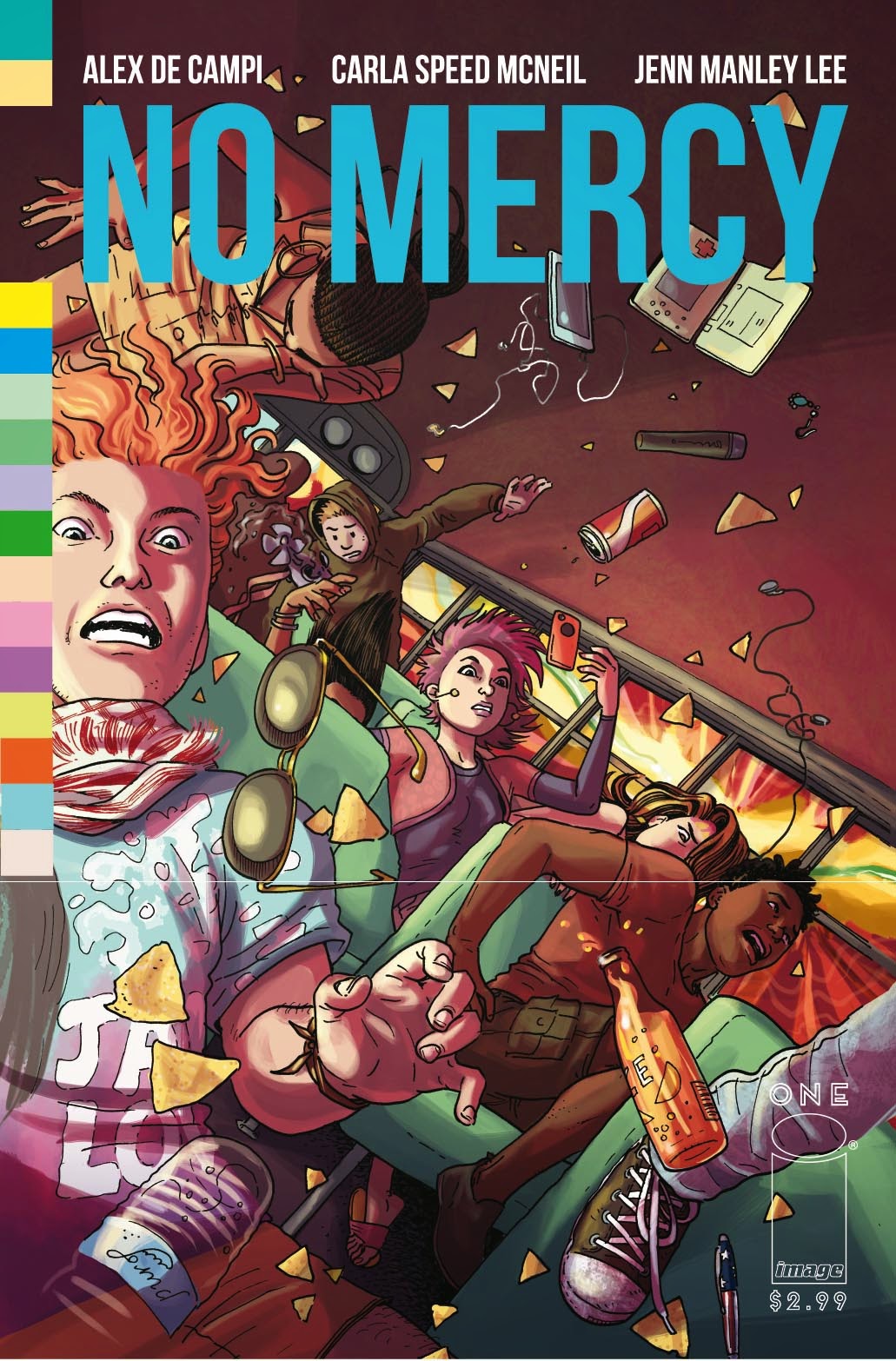 
No Mercy follows a group of American students on a special trip to a South American country to help erect a school.  It features a large and diverse cast of characters that give almost anybody who reads it someone to relate to.  The problem is that their trip isn’t going to go as planned.  While traveling on a bus to the town where they are going to be building the school one of the tires blows on the bus and they go over the edge of a high cliff.  This leaves the surviving members alone in a hostile area of a foreign country. Only a nun from the village they were traveling to knows the area and she seems very nervous.


There is a lot going on in this issue.  It gives many of the kids a chance to move to the front and lay the foundation of who they are in the grand scheme of the book.  Then you have the mystery  of the step-uncle of the nun and his briefcase full of what appears to be cocaine. I don’t know what the ultimate arc of this book is. but it does have some real potential to do what few other books are doing right now.  To show what happens when you take teenagers, who are already emotionally volatile in a normal situation.  And put them into an extremely volatile situation where they have to trust and rely on each other.


De Camp has put together a cast of characters in No Mercy that you could find while walking down the halls of any high school in the U.S.  But the real genious is there is no specific main character.  Instead De Camp puts together a group where anybody could be the focus of the tale and you will get a different perspective on the trials the group are facing.


The art of Macneil is a great fit for this book.  There wasn’t any confusion between character’s.  And his layouts were simple yet effective.  overall the art and layouts make the storytelling a lot more dynamic.


Rating: 3.5 Out Of 5
This was an enjoyable read that has a lot of possibilities for greatness.  Will it live up to the potential?  Who knows,  But I will be checking in again when the trade comes out.  I am not waiting for the trade because the book isn’t good though, I just already get too many books in issues right now.


Thanks for reading my reviews.  If you have any comments, questions or suggestions please leave them in the comments section below.  And as always ….  Keep reading comics fans.
Posted by Unknown at 2:05 PM