Review of "Return of the Super Pimps" 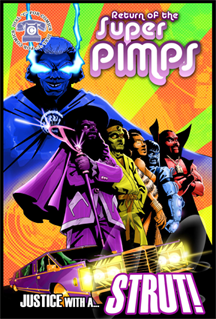 It’s a new week and I have a new review for you readers.  This week I am reviewing a book based purely on the over the top title.  It was suggested to me by my fellow writer for the site Tony.  So here we go….


Return of the Super-Pimps
Written By Richard A. Hamilton
Art By Ulises Carpintero
Released by Dial C For Comics


In the 1970’s the Super-Pimps are the Justice League of “The Hood”.  The Super-Pimps are made up of Blackbeard, the leader with the living locks.  He possesses amazing strength and his hair can be used as extra appendages.  Homeboy,  a bruiser with a connection to the streets.  His powers are similar to Richter from X-Force, but he has more of a link to the health of his streets.  Ghetto Blaster, The wielder of the 8-Track suit.  Ghetto Blaster is the Iron Man of the team, but his suit is made up of speakers that he can control to produce and manipulate sound waves.  Foxy Mama, a former “working girl” with werewolf powers.  She is very similar to Wolfsbane or Feral.  And Sidekick, the youngest member of the group.  Sidekick is a Kung Fu master much like a Shang Chi.


As the book opens the greatest nemesis of the Super-Pimps Darquefire is using his power of mind control to gain an army so he can rule everything.  But watching on from the shadows is a young boy who knows what is happening needs to stop.  So the boy runs to a phone and dials “P For Pimp” calling the Super-Pimps into action.  After a hard fought battle with Darquefire the pimps are standing in victory, but there was a price.  Sidekick attacked Darqufire but when he did so he struck the amulet that gives him the mind control powers.  The resulting explosion killed both Sidekick and Darquefire.  Or did it?


Flash forward 30 years and the Super-Pimps have disbanded after the death of their young member.  And the boy who called in the team in the 70’s is now a police officer working the beat in the Hood.  The boy now Officer Maple is called to a crime scene where a former informant for the Pimps back in the day is dead.  And upon a closer look it appears that Darquefire may have beaten death and returned.  The clues lead Maple to track down the Pimps.


Maple first tracks down Blackbeard, or Marcus as he goes by, now a single father of two struggling to get by and supply for his family.  When approached by Maple, Marcus tries to deny who he is and wants nothing to do with the officer.  He is still haunted by the fact that he couldn’t save Sidekick and wants just to forget the whole thing.  But the other members decide they have been idle long enough.  And when they return to the crime scene they find Marcus already there.  The team is finally reunited and ready to get back into action.


They come back together, but the team isn’t what they once were.  They are still battling with ghosts from their pasts.  And Darquefire is planning the ultimate coup that would leave him with control over most of the United States.   Of course there are bumps as always, but Super-Pimps manage to get into the fight, donning new costumes, and once again thwart Darquefire.


This book reads like a seventies  blaxploitation movie.  Or at least a spoof on them.  All the way down to the names of the villains in the universe the book puts together.  My favorite being a giant albino gorilla wearing a shirt and tie named Honkey Kong.  However there are moments where the story goes pretty close to the edge of being comfortable.  But those moments don’t really hurt in the long run.


The writing is solid for the most part making the characters very relatable and compelling.  And not to mention rather fun.  But the art is a little rough for most of the series.  The panel layouts are really easy to follow, but the art was just rough.  But there are times where it made the book feel more like the 70’s grindhouse story it was going for.


Rating: 4 out of 5
It was funny, emotional, and yes even uncomfortable.  And it was better for it.  I do suggest people check it out if they get the chance.  I would love to hear what other people get out of this series.

Thank you for reading my review.  If you have any comments, questions, or suggestions of other books to read please leave them in the comments section.  And never forget….. Keep reading comics fans.
Posted by Unknown at 4:09 PM