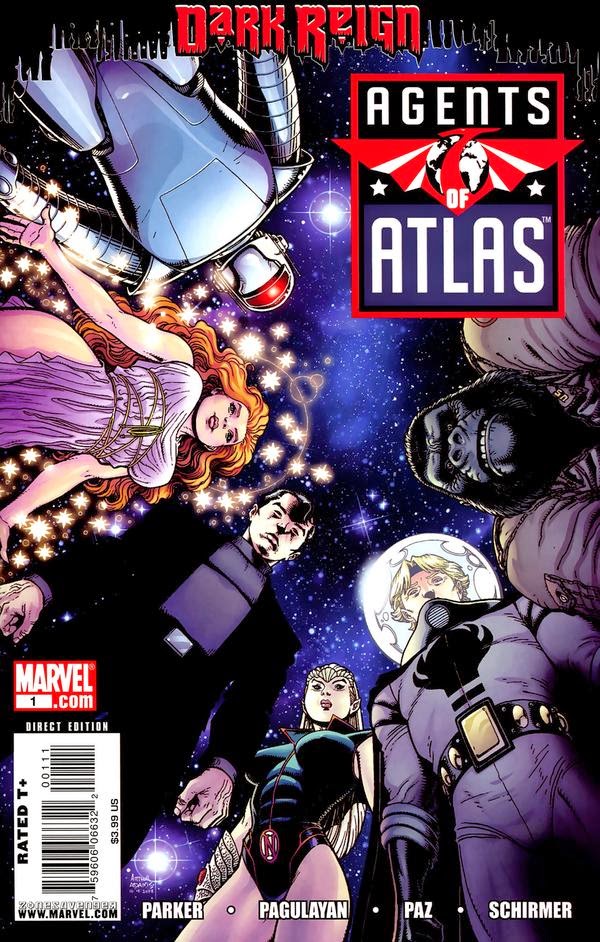 
The Agents of Atlas is a team that by all rights probably shouldn’t work.  But it works really well.  They are a team from the 50’s that worked for the government that is brought back together during Dark Reign.  The team consists of the team leader and head of the Atlas foundation Jimmy Woo. Former Marvel Boy, The Unranion.  Ken Hale the Immortal Gorilla Man.  Namora, the cousin of Namor the Sub-Mariner.  Venus, a greek legend wanting to atone for her past crimes. And M-11 a former death robot that has been reprogrammed. The Agents of Atlas use the reputation of the Atlas Foundation of being villains to try to help sabotage H.A.M.M.E.R. while at the same time keeping Osborn’s trust to keep gaining intel on the organization.  But this book had me at Jeff Parker writing a 6 foot gorilla with guns.


That said the characters really work well together.  And the way the team works makes the reader question which side are they really on.  And when their past comes into play the story really takes off.  The past is used to explain the teams past with the American Government and Atlas Foundation when it was an evil organization run by the Yellow Claw.


Jeff Parker is once again spot on with his characterizations.  Gorilla Man and M-11 really feel like an early version of Rocket and Groot from Guardians of the Galaxy.  Except they don’t interact with each other as much.  Parker also really makes the character of Namora, a character I always thought was uninspired, very compelling.  And I would really like to see somebody really run with Venus.  She has a lot of potential.


Art wise, all of the artists bring their own flavor to the series.  While at the same time making it very uniform.  But Hardman shines through with his art for the 50’s era stories.  Hardman makes the flashbacks seem like you are seeing the story in a retrospective film footage from the 50’s


Rating: 4.5 out of 5.
it’s not the best thing I have read by Jeff Parker, but it is really fun and definitely worth the read.

Thanks for reading.  If you have any comments, questions or suggestions of other books to read please leave me a comment in the comments section.  Stay tuned because next week I am going to start something a little different for a little while.  And as always.  Keep reading comics fans.
Posted by Unknown at 10:42 AM No comments: 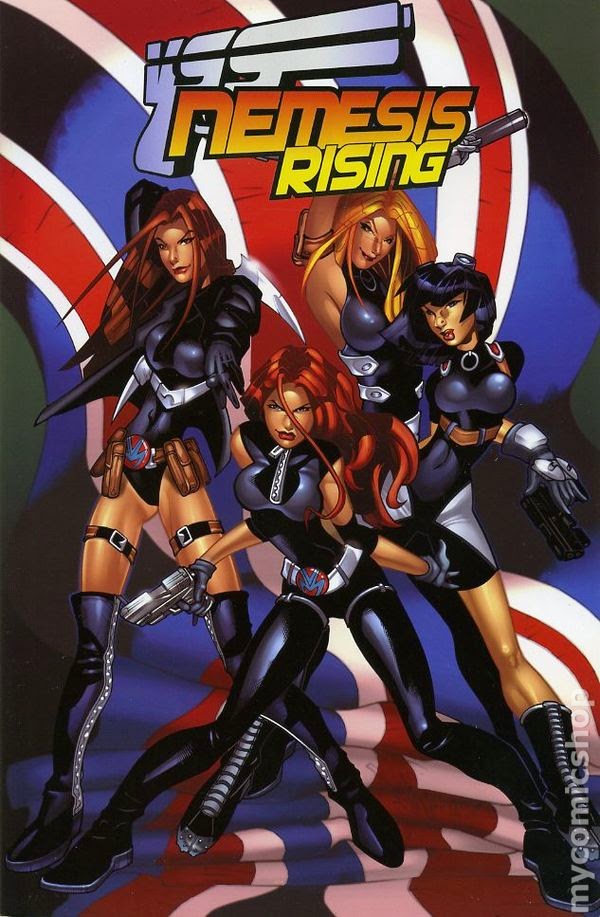 This week’s review was brought to me by my fellow writer on the site Tony.  He knows that I am a huge fan of Danger Girl, and figured this series looked like a similar style of book.


Deep down Victoria’s Secret Service feels like it wants to be more than it is.  When what it is is a really fun more british version of Danger Girl.  It follows a group of four girls from different countries and backgrounds who work for a highly elite spy organization known as Veil.  Of course they all have specialties that make them valuable to the team.  For example Raven is a dark haired tech specialist.  I believe she is supposed to be Asian but it is never actually said.  Then there is Brooke who is a brown haired martial arts expert.  Lark, a blonde weapons expert. and Scarlett a red haired former cat-burglar from Atlanta, Ga.


Throughout the series the girls take on the forces of their arch nemesis Lord Mann.  Most of which come across as stereotypes.  But the main story has the Veil agents protecting one of the royal family from being kidnapped by terrorist group known as the C.L.A.  of course shenanigans do ensue and the agents all have to use their talents (and good looks) to save the day.  So just your basic Danger Girl style story.  The only downside to this series is the accents that are being portrayed make it hard to read from one dialogue bubble to the next.  So at times I found myself going back a couple of panels to read the dialogue and make out what was being said.


The writing is decent, but nothing super special.  The characters come off as a little one note every now and then, and sometimes it gets a little confusing to figure out which accent belongs to which girl.   I would like to see how the writing of Griep and Davis could evolve from here.


As for the art in the six issues that were in this volume each issue had a different artist.  And none of the issues listed which artist did which issue that I saw.  That said all of the art was pretty good.  The girls were easy enough to tell apart as long as you could see their hair.  Because other than having their own distinct hair style all of the girls pretty much have the same basic body type.  Though some try to replicate  J. Scott Campbell style where others go for a Adam Warren style approach.


Ratings: 3 Out Of 5
While not perfect, Victoria’s Secret Service was a fun read.  I suggest giving it a look if you like books like Danger Girl.  But for the most part it made me want to go back and read all of my Danger Girl trades.


Thanks for reading my review.  If you have any questions, comments, or suggestions please leave them in the comments section.  I am always looking for new books to read, so I gladly accept reading recommendations.  And as always… Keep reading comics fans
Posted by Unknown at 5:15 AM No comments: 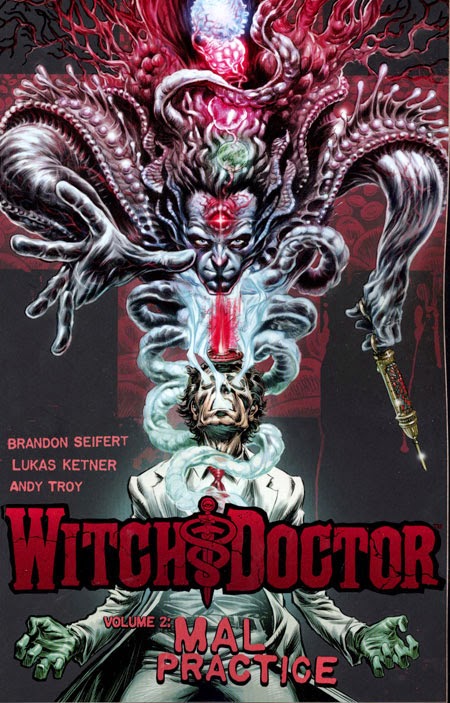 This week I am reviewing the second arc in an Image series.  I missed it when the trade first released, but I finally got my hands on a copy of it at Wizard World where I got the chance to talk with the creators.


Witch Doctor is best described as being a mix of House and H.P. Lovecraft.  It follows Dr. Morrow, a doctor that specializes in “supernatural” ailments.  With the help of Eric Gast, a former ambulance driver and Morrow’s assistant. And Penny Dreadful, a small girl who is possessed by a very strong demon.  Morrow is trying to stop the coming apocalypse one case at a time.


This arc also introduces Catrina Macbrey an unlicensed Witch Doctor, who is both Morrow’s nemesis and love interest.  With every meeting the two are in a constant verbal chess game.  Neither really ever getting the upperhand.  But at the same time they also make a great team against the larger threat.


Seifert writes a strong group of characters that make this series truly standout.  Each of the members of the team have their own distinct voices and views on the events that they face.  And the world they inhabit is flushed out beautifully with no need for excessive dumps of backstory.  There is an enjoyment in his writing of this series.


Ketner has a refined style with a great rough line that adds some extra atmosphere to the story.  And when there is need for the more Cthulu-esque aspects like the Strigoi creatures, Ketner makes them simultaneously beautiful and horrifying.  I couldn’t picture Witch Doctor being drawn by any other artists.


Rating:  4.5 Out Of 5
This series continues to be really fun.  I look forward to the third volume starting up in the future.

Thanks for reading my review.  If you have any questions comments or suggestions please leave them in the comments section.  And as always keep reading comic fans.
Posted by Unknown at 10:37 AM No comments: 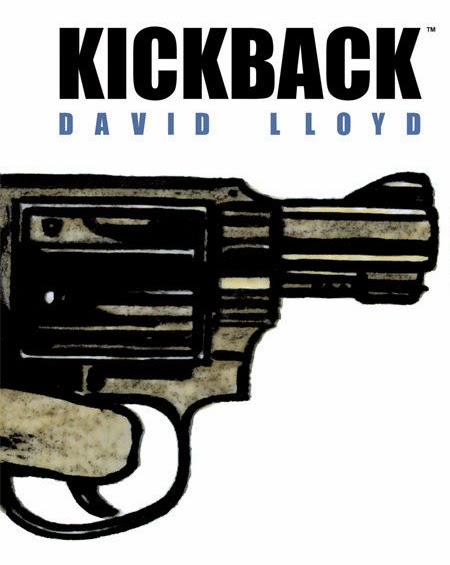 While at Wizard World this year I picked up some pretty random trades to review.  This one is definitely on the more obscure side to me.  I know of David Lloyd from his work on V For Vendetta.   However this is the first book I have read where Lloyd writes and draws the book.


Kickback has a very interesting premise.  It is about a police force that has made a deal with the local crime element that for a collective price they will look the other way on small crimes as long as the crime element doesn’t go big with their crime.  So far the deal has lowered the crime rate in the city, but it is clearly an uneasy balance.  Then someone pulls a hit on a room full of cops, an event that threatens to destroy the alliance and throw the city into a violent turf war.


Sadly the full product doesn’t live up to the great idea for the book.  The story was hard to follow and I couldn’t tell you the name of any of the major characters, and there is a back up story to do with weird dreams that never really seemed relevant to the story as a whole.  In fact I have read through it a couple of times and still haven’t figured out who carried out the hit on the police and what their motivations were.


The art on Kickback is where the book shines.  Lloyd has a great style for the noir feel the book was going for.  Even if most of the police officers look the same.  I really enjoyed the atmosphere that the art was creating for the book.


Rating: 2 Out Of 5
The art may have been really good, but even that couldn’t save the mess that was a story that was difficult to follow.  I really wanted to like this book, but it just didn’t deliver.

Thanks for reading fellow fans.  If you have any questions, comments or suggestions feel free to leave them in the comment section.  And as always, keep reading comics fans.
Posted by Unknown at 3:54 PM No comments: