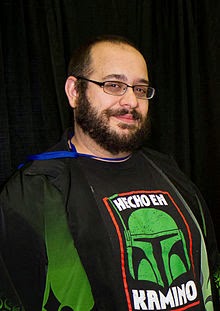 I recently got the chance to do an email interview with Aaron Duran,  a Portland based comic writer that I have been a fan of for a while now.  He is currently writing two self published books, La Brujeria and Dark Anna and the Pirates of Kadath.  But there are many levels to the man that is known as “Geek In The City”.  So let’s dive right in.


Ted: Where did your passion for comics begin?


Aaron: I don't really know where my love for comics comes. Actually, that isn't true. Comics have always been a pretty big part of my family for as long as I can remember. With some exception, I didn't have adult figures talking down to comics. My mom saw it as a great way for me to learn to read (which they are), and many of my aunts and uncles read comics well into adulthood, so it came pretty natural. I guess something about the sequential art format spoke to me. And, as much as I love film, radio, and television, they all have a limitation that comics simply do not have. I can tell any story I want, without a care towards budget or technology.


Ted: You are currently writing La Brujeria with James Sinclair and Dark Anna and the Pirates of Kadath with Ethan Slayton.  Are there very many differences between the way the collaboration works between you and the two artists?
Aaron:  I think the biggest difference in working with James and Ethan are the levels of familiarity and shorthand I can get away with. I've worked with James long enough that I can basically say something like “horror hag, kinda' lich-like” and he knows exactly what I mean. I am certain Ethan and I will get there, but for now I try to be more specific. In the end, I try really hard to cater myself to the individual artists style and likes. (Although I enjoy tossing in a curveball from time to time). But I  think artists have the more labor intensive side to comics, so if I can help them tell a better story, so much the better. Strong art can save the weakest scripts, so you give as much as you can to the artist.
aron:


Ted: Both of your books feature a strong female lead, which I as a person who grew up mostly in a house filled with strong females, find a really strong selling point.  What inspired you to make both of your leads female?


Aaron: With Althalia, it just felt like the right choice. I grew up in a house with strong and independent women, and some of the stories they would tell me always focused on women with special gifts. So when I started playing with the ideas behind La Brujeria, it made sense to make the lead a woman. With Dark Anna and the Pirates of Kadath, it was a necessity. When I first started working on the story, I initially planned to make it with Kevin Stephenson (who would end up doing the cover for the 0 issue). We wanted to make a pirate / Lovecraft comic together. During our planning stage he mentioned he'd love a book that he could give to his daughter one day as inspiration. And I wanted to take a historical pirate and give them a fantasy twist. Cut to a quick Internet search and I found Christina Anna Skytte. The rest fell into place. That being said, all of my stories start with the fleshed out human element first. Simply starting out by saying “Well, time for another strong female hero” is an immediate disservice to the story and readers.


Ted: What complications do you find being a creator who is self published?


Aaron:  Money, or the lack thereof. I know, such a mercenary answer, but it's the truth. Modern printing and digital comics have made it easier than ever to get your work out there. But it still takes money to make a comic. With La Brujeria, James and I have a more equal partnership, in that we don't get paid until the book gets paid. And while we've always operated in the black, no one is making anywhere near what they should make. (Read, anything at all). As a freelancer myself, I know all too well what it's like to be offered a job that pays in “exposure”, (which is code for giving it all away and wasting your time). So when I come up with a new comic idea, I work very hard at making sure the people involved get some form of compensation. That all adds up, rather quickly. Then comes distribution. It's simply not there. Well, not to the extent a creator would like. There are places like ComiXology, Apple Comics, and DriveThruComics that provide global platforms, but it's a very crowded pool. Still, it's a wonderful feeling when you can help get your book to rise above cacophony of the crowd. So I guess the very thing that makes it challenging is also a huge opportunity.


Ted: What creators inspired you?


Aaron:  Oh wow, there are quite a few. In comics, one of my earliest inspirations was and is Denny O'Neil. I really got into comics when he was an editor at DC and I remember flipping to the middle of the book to read “From the Den” before I read the comic proper. Later I would dig through back issues and discover the incredibly smart storytelling he was doing, years before anyone else. In the more modern era, it's writers like Greg Rucka and Kelly Sue DeConnick that leave a strong impression upon me. In their own way, their styles and stories are utterly fearless. But on the flip side, aren't put off by telling a story simply because it sounds like a hoot. In recent years I've tried to focus on artists. Mainly because I want to know more than “well, it's what I like”. To that end, I am still in awe behind the manic genius Jack Cole, the creator and artist behind Plastic Man. A rather haunted man, but what he did for visual storytelling was simply amazing and very under appreciated. Then there are creators like Becky Cloonan and a whole swatch of creators that made their own books and never once compromised. It's a work ethic I try to follow.


Aaron:  Kevin Conroy, no question. I read anything with Batman, that is the voice I hear. Now and forever. Indeed, when it comes to my favorite, I'm going to fall down the Animated Series line the whole way. That series is Batman perfection. But, if I have to pick a live version, I don't think Michael Keaton gets enough credit. His Batman was a little stiff, but I think his Bruce Wayne is a wonderful mix of obsessed and aloof. (Although in a better movie, George Clooney could have been THE Bruce Wayne).


Ted: Do you feel the amount of event series and the tie-ins that carry over into the regular books are hurting or helping the big two?


Aaron:  I think the Big-Two are only focused on the short term. For good or bad, they have bigger masters to serve and those masters, with their shareholders, are not interested in the long game. (Although I think Disney has been very good for Marvel, I don't know if the same can be said for DC and WB). Having been both a consumer and merchant in comics, I know event fatigue is hitting both pretty hard. The number 1s always serve up big numbers, but they simply don't sustain. But, they sell well enough that both DC and Marvel are going to keep it up. Hate all the constant resets and events leading to events leading to events? Stop buying them. Support the ongoing stories and both companies will respond. It's as simple (and difficult) as that.


Ted: Wolverine’s bone claws.  in your eyes which is the better continuity. Did he Always have them? Or are they due to his healing factor compensating for the adamantium being ripped from his body by Magneto?


Aaron:  I'm a big jerk and say neither. When Magneto ripped the metal out of him, he should have been sans claws, period. But I guess if I HAVE to pick, I'd go born with them. The compensation angle just doesn't make any sense to me. Not ever superhero comics sense.


Ted: Between my co-creator on the site Tony and I we have a debate going.  So perhaps you could help us settle it. “Alien” and “Aliens” are two very different styles of movies, but in your opinion which is the better movie on the whole?


Aaron:  Whoa, whoa, whoa... Don't pull me into your nerd-lover spat here. Nice try! Also, I am again gonna' pull the jerk move and say you're both correct. The thing with Alien and Aliens is that aside from a shared universe and monster, they are wholly different films. Alien is quite honestly the greatest Lovecraftian horror film ever made. Whereas Aliens is a kick ass war movie. While both use dread with strong results, the pay off is from a whole other spectrum. Now, if you want to know which one I pop in the player more often, that's Aliens. On the flip side, Aliens can be a casual background flick that I quote as I cook dinner. But Alien? Alien requires a dark room and your total attention. Didn't help at all, did I?


Ted: So where can people find Dark Anna and La Brujeria if they wanted to pick them up?


Aaron:  Right now both are only available online. We still have some print copies of Dark Anna, which you can find atgeekinthecitycomics.bigcartel.com – You can get a digital copy at ComiXology. (A 5-Star rating is always appreciated, it's the only way a Submit Title rises up the ranks). La Brujeria is only available in digital format these days, we can't afford a 6th printing (yes, 6th, to which we thank everyone for making that a necessity). La Brujeria #1 - #4 is at DriveThruComics and ComiXology.


Ted: Are there any upcoming projects you would like to promote?


Aaron:  I am in the middle of publishing my first novel, in fact by the time this goes out the book should be at a few publishers being reviewed. So, fingers cross at that one. James is hard at work in finalizing issue #5 of La Brujeria, while Ethan and I are hard at work on the first full issue of Dark Anna and the Pirates of Kadath. (Look for shameless crowd-sourcing promotion soon). Finally, I am working on an unnamed project with Matthew Clark which we should be announcing early in 2015. In the mean time, people can check out my weekly podcast atGeekintheCity.com, it's moderately entertaining. You can also follow me on Twitter at @GeekintheCity, where I will ramble on about episodes of Star Trek, why Flash Gordon is a genius film, and random home brewing pictures.
Thanks for taking the time to chat with me!!


Aaron Duran works several jobs, podcaster, ships cook, brewer, and writer just to list a few.  So volunteering his time to answer these questions for me was a real honor.  And if you get the chance please checkout La Brujeria and/or Dark Anna, they are both really good books and a lot of fun. 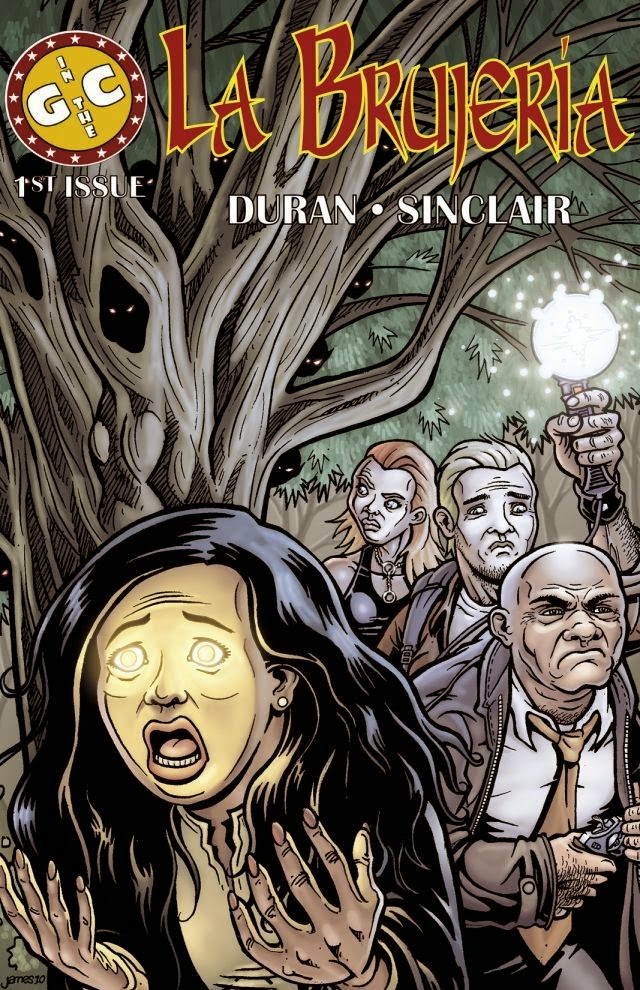 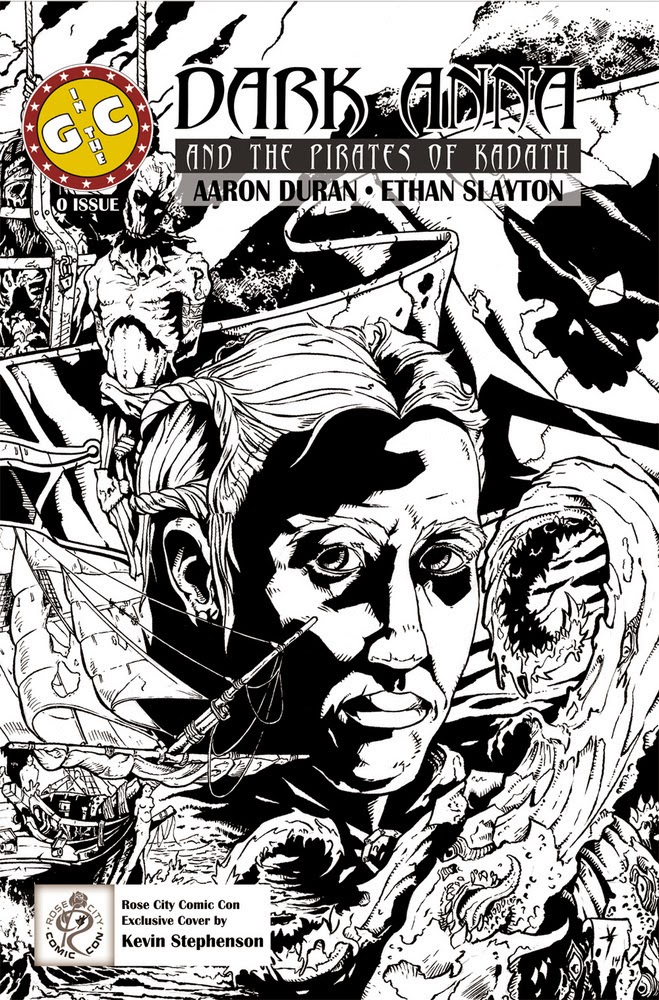