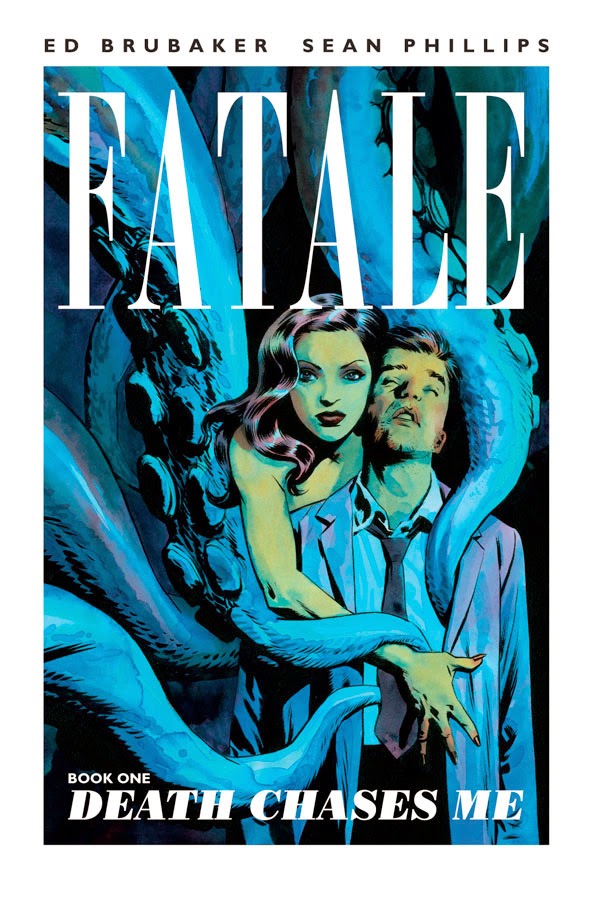 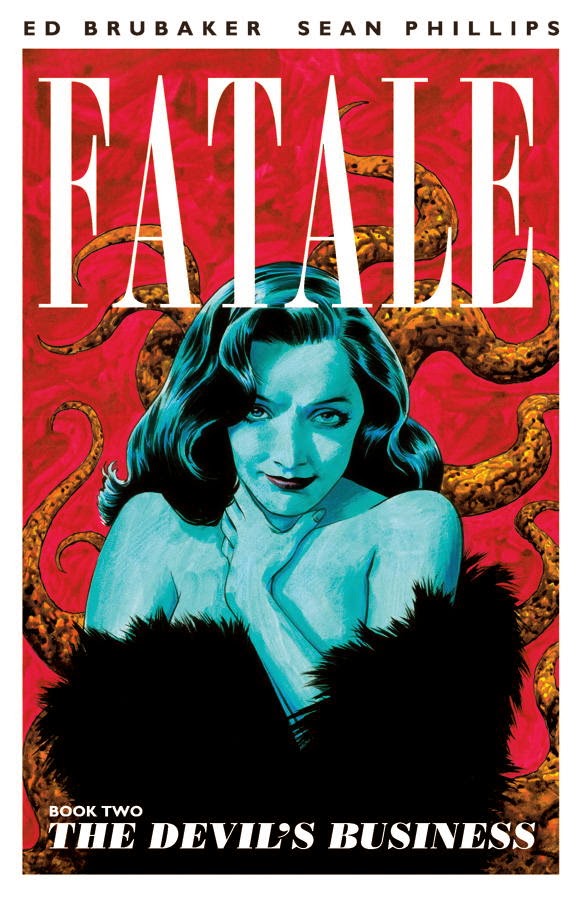 I am a huge fan of the creative team of Ed Brubaker and Sean Phillips.  They have a strong working relationship.  So I finally decided to check out one of their latest projects.

Fatale is an interesting series.  It takes the noir drama that Brubaker and Phillips are known for, and add a big helping of supernatural.  The supernatural aspect is a bit jarring at first, but as the story develops the book finds a good balance of the noir and creepy.


Fatale tells a story that spans many decades.  The first trade tells the story of a reporter who gets tied up with a mysterious female that seems to draw men into her orbit and they can’t seem to get her off their mind, named Josephine.  The reporter is looking into a story about two corrupt cops in the 1950’s.  The story leads him to meet Josephine, who is linked to one of the cops.  He immediately is head over heels for her despite being married.  The deeper Josephine takes him into her world the darker it gets.  Eventually leading the duo into a game of cat and mouse with a cult that has ties to Josephine’s past.


The second arc takes place in the 70’s, where a washed up actor is trying to escape a cult with a female friend they are after and ends up in her backyard.  Josephine has exiled herself because of the effect she has on men, but takes the man and his friend in for a reason she doesn’t understand at first.  When she finds a film reel in his jacket she realizes that the man she saved has run afoul of an off shoot of the cult that has been seeking her for decades.  Josephine makes a deal with the man to help her get a hold of a tome that the cult possesses that may help her find more about her past and what she is.


Both stories are framed by the story of Josephine meeting the heir to the reporters estate at his funeral in present day.  His inheritance leads him to find an unpublished manuscript of a book that was actually the story of how he met Josephine.  Upon seeing an image of her he realizes she hasn’t aged since the 50’s.  His fascination with Josephine leads him into all kinds of dangerous situations.


Both arcs are really strong and I don’t want to spoil the big events of the series to this point.  Brubaker really gets out of his comfort zone with the more supernatural aspects, but proves he can handle the change without much of a problem.  For the most Fatale feels like the rest of the noir books he has written.  But the Cthulu twists really make Fatale stand out.


If you like Phillips’ style of art then this book will make you happy.  He brings the dark and gritty world of Fatale to life with his beautiful yet rough art.  Josephine is easily recognized from all of the other characters and when she shares a panel with other characters she pops off the pane.  It is clear that she has powers over men from the first time they meet her.  And the light and dark play that Phillips does so well is fully on display in this series.  The latter really helps set up the creepy feel of the cult.


It’s not the strongest book I have read by Brubaker and Phillips, but it does have me interested to see where Fatale goes after the second trade.  So there is a good chance I will do I follow up to this review after I read the last three trades.  I definitely recommend this series to people who like what the creators have done before, or even fans of HP Lovecraft.

Thanks for reading my review.  If you have any comments or suggestions please feel free to leave them in the comment section.  So until next time.  Keep reading comics fans!!!
Posted by Unknown at 5:53 AM