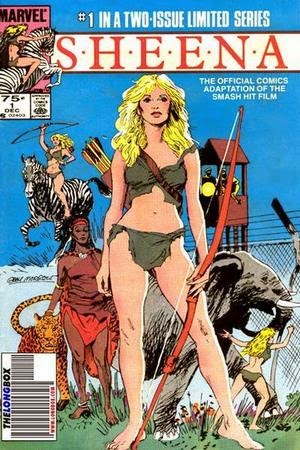 As the title says, this is our second review challenge.  Only this time,  it’s Ted issuing the challenge to me.  If you’d like to check out our inaugural review challenge, it can be found here.  Ted found this one at our LCS and grabbed it because there’s a story behind this one.  When I was really little, around 6 or 7, my sister really wanted to see The Last Unicorn at the theater.  For some reason, my mom took us to what turned out to be the most bizarre double feature ever.  It was Last Unicorn/Sheen: Queen of the Jungle.  To this day, I can’t understand how you go from having an all ages animated film paired with a movie with an incredible amount of topless nudity.  It was quite an assault to the senses, as a child!  Anyway, on to the review...

I’ll try to review this as if it were just a comic book on its own merits and try to leave the fact that it’s a movie adaptation out of it.


When the story begins, we are introduced to a husband/wife duo that are anthropologist, archaeologists, or something of the like.  Their actual profession isn’t quite made clear.  They’re investigating rumors of “healing earth”, a place of earth that seems to have healing properties.  They are traveling with their young daughter, Janet.  Against the advice of the local tribe, they decide to explore a cave that they believe is the source of this healing earth.  Startled by their daughter’s appearance in the cave, their screams cause a cave-in.  Both parents perish and only Janet survives.  Inexplicably, instead of returning the child to the states to her parents’ next of kin, she’s taken in by the tribe’s shaman and raised as Sheena.


Sheena learns the ways of the jungle.  She learns to summon animals to do her bidding, like some sort of Aquaman of the Veldt.  We then cut to scene of a scientist, who was hired by the king of the region’s brother, telling the prince that he’s found that the area is ridiculously rich in titanium.  The prince lets this scientist know that he plans to murder his brother so he can assume the throne and approve mining of the area, something his brother would never do.  This prince then gives the scientist a pill that will help with the nagging cough that he’s been displaying.  And wouldn’t you know it, his dumb ass takes the pill and keels over dead!  If you just learned the guy standing next to you, who certainly isn’t a pharmacist, has regicidal tendencies, would you take a pill from him and not suspect it might be poison?


At the same time, this shaman that raised Sheena has a vision that something bad is about to happen to the king, so she travels to the city to warn him.  Through a series of events, she winds up getting framed for the king’s murder. If her dumb ass was such a brilliant seer, why didn't she foresee that happening? The issue ends with bargain-basement Aquaman rescuing her from prison, with the help of an elephant, gorilla, some lions, and a zebra.


I can’t really put too much blame for the retarded story on Cary Burkett’s shoulders.  He had some terrible source material to work with.  This was really one of those just-for-the-paycheck deals, I imagine.


Gray Morrow, on the other hand, I can critique all I want.  His art is serviceable, for the most part.  In my opinion, the two most difficult things for an artist to draw are human faces and realistic animals.  Unfortunately, he was average at best on both counts here.  Researching his previous work, you can easily see this wasn’t his best work.  Since he was the co-creator of Man-Thing, I’m sure a mega fan of Man-Thing, like Jeff Parker, will want to punch me in the nuts for ripping on this poor guy's art.


The verdict:  Don’t go out of your way to read this one.  The cover price was 75¢.  They should pay you at least that much to read this mess.  Honestly, the best thing about this issue was the ads.  It was a trip down memory lane with ads for NBC’s Saturday Morning Cartoon Lineup and an ad for the Secret Wars action figures.  Now that was good stuff!