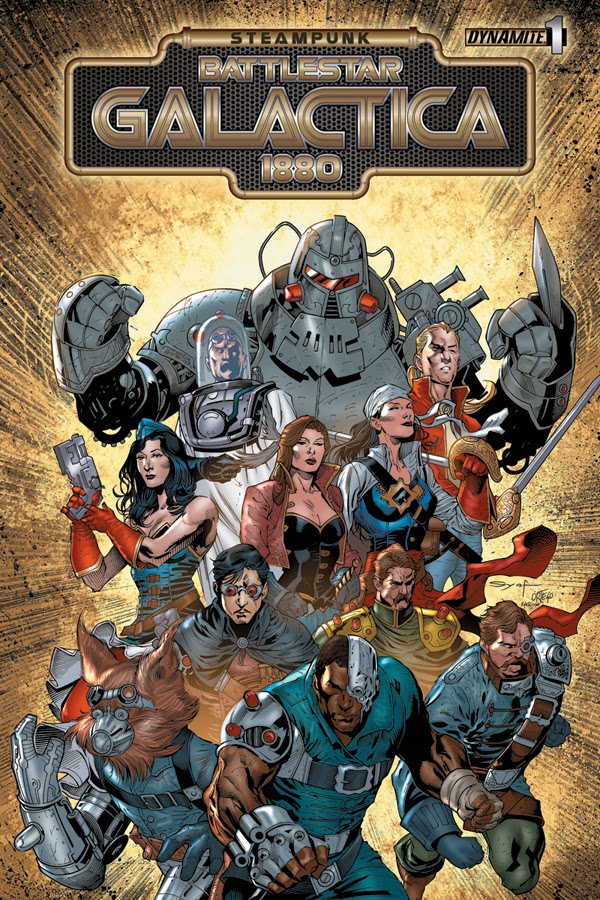 The story is closer to the original than the remake.  To help fight a war with an alien race Dr. Baltar creates steampunk soldiers he calls clockwork knights which are the cylons.  After the war ends Baltar is forced away from the colonies and he takes his army with him.  Nobody expected to see Baltar and his army again till he destroys Caprica by turning one of the Battlestars into a bomb and crashing it into the surface. During the battle of Caprica, Apollo is downed and his body isn’t found.  So his sister Athena gets the location of the only man who can track Baltar to find Apollo, the “traitor to the colonies” Starbuck.  It is revealed that Apollo is in fact being held captive by the cylons and Baltar plans on making him the first in his new line of clockwork knights.  A human/ machine hybrid.  This issue was a whole lot of setup for events to come, but the world it is building is really interesting.

The changes to the characters makes the story that much more fun.  For example the reveal that Starbuck is now a pirate who is playing two pirate sisters against each other.  Starbuck feels very much like Han Solo in this incarnation, he even has a Chewbacca like side kick in Muffit, a robot daggit. He was the robot teddy bear in the original series.  Other changes include Boomer being an man/machine hybrid after being shot down in a battle that occurred before the book began, so everyone assumed he was dead.  But he was actually exiled for the experiments that Baltar performed on him.

The art was unfortunately really weak which was sad to me, because most books coming out of Dynamite these days have some pretty stellar art.  Although the art doesn’t completely drag down the book, I wish they could have given it at least a slightly better artist.

My final verdict on this issue is that it was a fun read and could have a lot of potential.  Will the series live up to what it could be remains to be seen.  I may pick up another issue of this if I have the chance, but I know that based on this issue I won’t add it to my pull list  just yet.