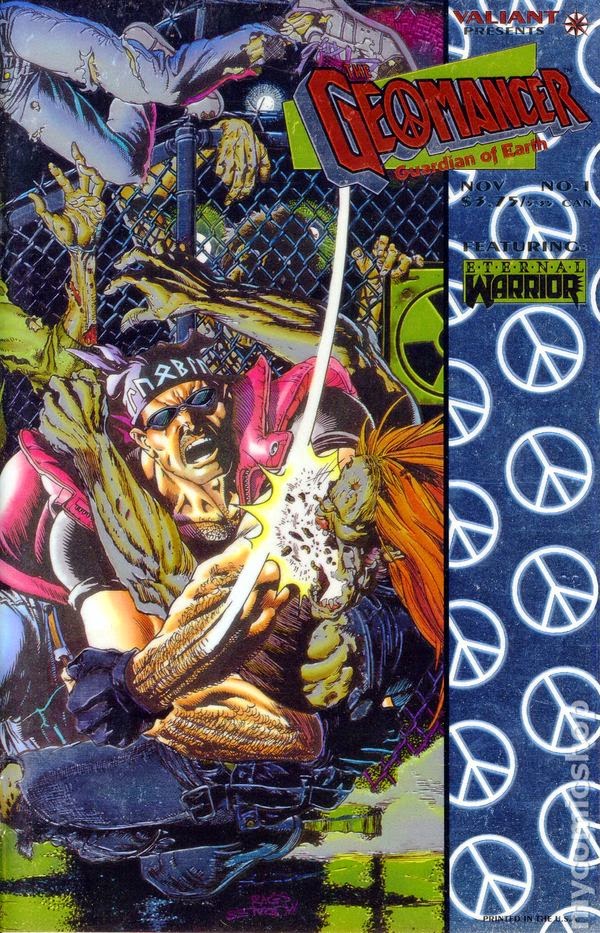 Welcome to my next retro review.  This time around I am taking a trip to the 90’s vault to read a entry from the original Valiant era.


The Geomancer: Guardian of Earth #1
Released by Valiant
Released in 1994
Written by Maurice Fontenot
Art by Rags Morales


I have been impressed with the little I have read of the new Valiant imprint.  Mainly I have read Quantum and Woody, and Archer and Armstrong.  The latter which introduced a new Geomancer.  That is what made me want to check this issue.


The Geomancer is an avatar and protector of the Earth spirit who is chosen by the Earth itself, and protected by Gilad Anni-Padda the Eternal Warrior.  The first Geomancer was called by the Earth in 3500 B.C. and there has always been a Geomancer since.  When one is dead the next will receive the calling.  The Geomancers have been chronicling the battle of the Geomancer over the decades in a journal called “The Book of Geomancer”.  The story spans many decades and references several people who have been the Geomancer in the past.


As the book begins the latest Geomancer passes on of old age after finishing his final entry in the book.  With his passing it is time for the next Geomancer to rise and fight.  Enter Clay McHenry, a disgraced former cop who is blind.  They never explain what he did to be kicked off the Police force, but there are several references to him being on the take and responsible for the accident that crippled his former partner.  Clay is in a bad place mentally and considering suicide when Gilad comes to him to ask him to take the book and answer the call that falls to him upon the disappearance of his nephew Geoff.  Upon touching the book his mind is completely opened to the calls he has been hearing for months.  This revelation gives Clay a new purpose in life by allowing him to do something great for a change.  Though Clay is all in, Gilad doesn’t think he is the right man to be the protector of Earth.  Gilad feels that Clay is a dark hearted person and hints that he feels Clay will abuse the powers.


Gilad is not the only person looking for the Geomancer and his book.  There is a hooded figure calling him/herself Darque who wants to kill Clay and take the book for him/herself.  The hooded figure sends some undead minions to retrieve the book. When the minions attack Clay gets badly injured fending them off.  Gilad has no choice but to resort to some healing ritual that requires Clay to be buried alive alone in the earth.


This issue was an okay start to the tale.  It definitely suffers from a case of the 90’s, but there are some great character moments for Clay McHenry.  Between his struggles with what he has become due to his poor decisions and his visit to his former partner.  Fontenot really makes the reader care for the Clay and root for him to atone for his mistakes.  The art of Morales is pretty good, but you can tell he was still developing the style that makes him such a great artist right now.

It was compelling enough for me to give more issues a chance.  And the fact that it was only an 8 issue series that I could probably find in the 50 cent bins at my local comic shop makes it a lot easier to read it all.
Posted by Unknown at 3:29 AM