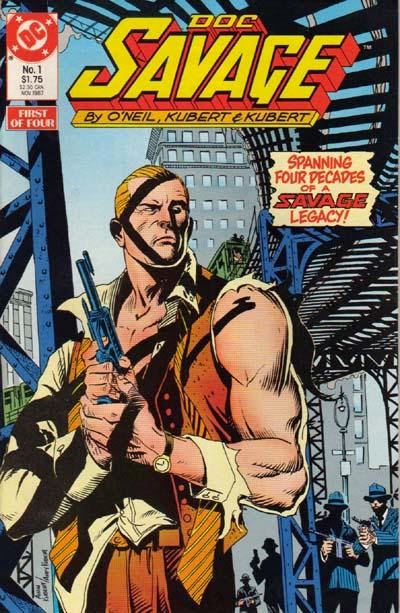 My knowledge of Doc Savage is limited at best.  I have heard reviews of Doc Savage books and done research on Wikipedia to familiarize myself better with the concepts of the character.  But lately I have been on a real kick of reading the old pulp characters of the 1920’s and up.  It was after I grabbed this issue from the 50 cent section of my local comic shop that I realized it actually had an all-star creative team on it.

Doc Savage is a classic pulp hero from the 1920’s.  He was raised by a group of scientists, and because of his upbringing he has developed and extremely high intellect as well as being very physically gifted.  It is these natural gifts that make him the perfect man to help protect the world from evil.  He is aided by a group of former military men and fellow scientists.

This issue is the first of a four issue mini that spans over multiple decades.  The story begins only days after the end of World War II.  Savage and his men have recently returned from a mission in Europe and are about to meet at a restaurant in Times Square.  However there are spies within the borders of the US who are looking to put an end to Savage and his men.  The attempted ambush goes awry thanks to the Doc himself, who was running late, but in the chaos one of the men gets clipped by a bullet and the supports to the restaurant’s roof are severely damaged.  Savage holds the supports long enough to get everyone out before the roof falls.  Only one of the conspirators survives and is captured by Doc Savage and his men.  After an intense “discussion” Savage finds evidence that  they were working for a familiar villain named Herr Wessel.

This is only the first of four issues, but it gives enough to keep me interested and wanting more.  I have no base of comparison for the characters, but I liked the way the characters have very distinct voices and all seem to play off of each other perfectly.  O’neil really delivers some good writing on this one.  He makes it easy for a novice Doc Savage reader to understand who all of the characters are without bogging the issue down with lots of slow unnecessary story dumps.  Even when the villains backstory gets explained it is done so that it is interesting and covers a lot of ground in only a page to a page and a half.

When you factor in that this book came out in the eighties, the Kubert’s art is breathtaking.  Every character is clearly recognizable from the others.  Even in panels that show the group from a distance. For example one of the members of Savage’s team is very sickly looking.  The panel layouts are really well composed and none of the page is wasted.  I was never once lost on where to go next when reading the issue.  There are few splash pages and it is better for it.

If I find the other three issues of this series I will most certainly pick them up.  I am hooked to find out where this book goes.  And the character of Doc Savage is awesome.  I have really found a growing appreciation for old pulp heroes.  I will have to go back and check out other classics like The Shadow and The Phantom.

Thanks for reading my review. I hoped you enjoyed it and will check back later for more reviews of books both old and new. Keep checking back, because I have some previously written reviews that I will be posting in the coming days. Comments and suggestions are always welcome.