For this review I am doing a little something different.  My fellow collaborator on “Once Upon A Longbox” Tony, has challenged me to read a three issue arc of Wolverine from the nineties.  He chose these issues because they were the first three comics he ever bought and as such formed his love for comics and the character of Wolverine.   So lets do this. 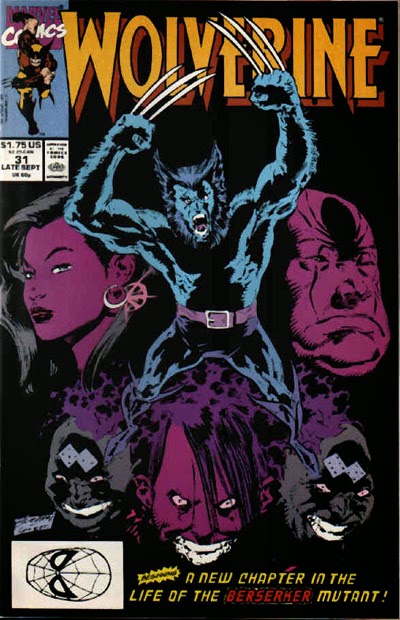 This arc is one of the Wolverine in Madripoor stories, so most of the time he is referred to as Patch.  The overall story was weird yet fun.  A Yakuza crime boss named Dai-Kumo-Sama wants Logan dead because he is the only person standing in the way of his plans.  So the Yakuza sends a large group of thugs to take him out at his business  “The Princess Bar”, which he owns with a friend named Archie.  Before the attack starts Archie slips out the back and calls in a favor with an member of the underworld named Tyger.  After some great action Wolverine is left standing over the bodies of a bunch of dead Yakuza.  Realizing their first wave failed three of the elites enter the fight, stating that it is time to use “Raiden“.  The three each pop a pill and are blessed with heightened abilities.  The user feels no fear, pain, or conscience.  As well as mildly enhanced strength and speed.  Wolverine takes them out but he takes some serious damage in the process.  His healing factor is working slowly due to the amount of damage he has taken, but allies arrive in time to get him out before the next wave arrives.

Now the story gets truly weird.  The Yakuza boss wants to wipe out an endangered breed of monkey from Madripoor so that he can make what he is telling people is the cure for cancer, but is really a two stage drug that gives the user superhuman abilities.  The catch is that the drug is highly addictive and kills the user after only one or two uses.  Dai-Kumo-Sama believes Patch is dead so he moves forward with the harvesting the monkeys for the rare Hypothalamic fluids that is the key ingredient in the drugs called “Raiden” and “Thunderbolt”. 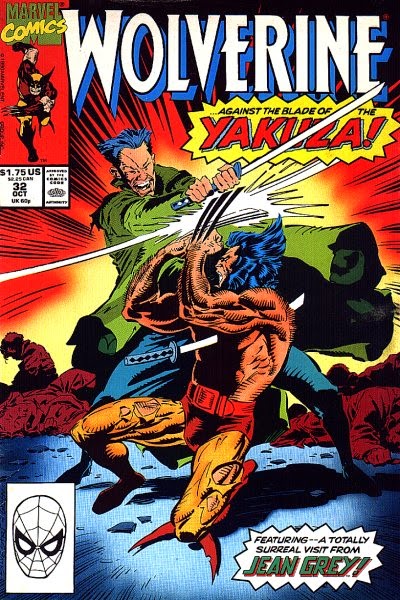 While Logan is laying low to heal up, there are members of the Yakuza that know he is still alive and where to find him.  So when his friends leave him alone while they go to find information on where to find Dai-Kumo the agents kill the guards left behind by Tyger and Archie to make sure no further attempts are made on Logans life, and stab Logan through the chest.  After Logan falls down “dead” the two assassins taker a picture of the dead body of Logan for proof of his death and leave him for dead.  After all nobody could survive being stabbed through the chest by a sword right?  Even though he is not dead, Logan has a near death experience like dream where he sees Jean.  Who helps him to remove the sword from his chest and allow his healing to start again.  As he awakens from the dream he is told by his friends that Dai-Kumo is in Japan about to release his miracle cure for cancer.

Now that he knows where to find his target he and his cohorts try to smuggle Logan into Japan by shipping his “Dead” body.  But his body is taken by the Yakuza so he can be honorably buried by them in one of the boss’ personal plots.   When Logan wakes up he is buried in a coffin six feet under and not happy about it.  He proceeds to dig himself out to find that the female Yakuza assassin is mourning at his grave.  She was hoping that Logan would succeed at killing the boss and all of his men so she could start fresh with her life.  Logan spares her life and goes to finish his business with Dai-Kumo.  Which ends just like you would imagine it would.  and he destroys the drug in the process.  The last you see is the female assassin watching as Logans plane flys off, giving her a hope of a new life. 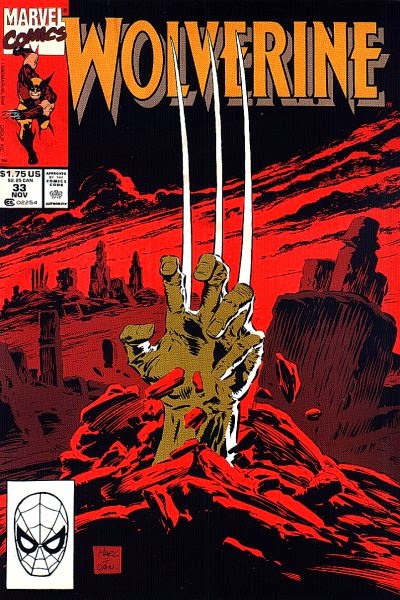 Like I said it is a pretty strange story, but boy was it a fun read.  I feel Wolverine is a hit-or-miss character most of the time, but these issues were definitely a hit.  I feel a stronger appreciation for the character and I feel better for having read these issues.

Hama’s writing made what could have been a real mess of a story into a quality three issue action/revenge tale.  Logan’s voice feels spot on to how I feel the character should be.  The dialogue was simple yet great, never feeling exaggerated or forced.

Silvestri does some great work on the art for this series.  It does have some tell-tale signs of being from the nineties, but it never made my eyes roll like a lot of art from that era.  Silvestri makes Wolverine look like he should.  Short and stocky, but believable as a guy who could take large groups of armed enemies out with little stress.  When the action picks up Silvestri manages to make the art flow perfectly.  I never felt that I didn’t know what was happening in a panel.  And I was never confused on where to go from one panel to the next.

I had Ted check this out because I thought it would be fun for him to check out the book and arc that got me into comics.  #31 was the first book I ever bought and I was instantly hooked!  Everything about it clicked for me:  the art (especially the art!) and Hama’s characterization of Wolverine.  I agree, the story is kinda weird and corny, but that’s what comics are for.

I really miss Wolverine being written this way.  He’s a gruff, anti-social character, but he’s fiercely loyal to his small circle of friends.  This was a time when he knew very little of his past and had limits to how far he could push himself before he had to take a step back and let his healing factor do its job.  In more recent years, he’s been written as a mutant wrecking ball, no amount of damage was too much.  I hope we see a return to this character after he comes back from his upcoming “death” (we all know it won’t be permanent).  They need to debunk the origin that he was given in Origins and go back to his past being shrouded in mystery.  Also, the “the claws have always been bone” is bullshit.  But maybe I’ll make that a topic for another article.  Glad you enjoyed it for the mindless fun that it was, Ted!
Posted by Unknown at 4:34 PM