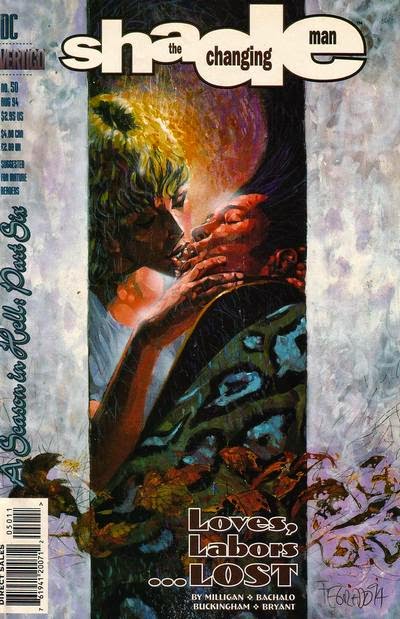 This is the first in a new style of retro reviews.  I work at a local comic shop called I LIke Comics.  Every other Tuesday I stock the back issue bins, so I decided that I will randomly pull an issue out of a random box of old comics.  This was an idea conceived by my buddy Tony.  So here goes my first edition of what I am calling “Luck of the DRAWer box”.

I have read the first three trades of the Peter Milligan run and I have been a fan from the moment I read issue number 1.  I have also read the issues of Justice League Dark that Milligan did, which was pretty much Milligan’s goodbye to the character of Shade.  That said this issue was actually the key moment that made the character of Shade into the what he was.


Shade the Changing Man #50 is the sixth part to a story arc that I have read no other issues to.  You get the story of Shade and his girlfriend Kathy, who is now pregnant, holding up at a small motel with three others.  The group is mourning the death of a friend who died in a fire and there are angels looking to “recruit” Shade and Kathy’s baby.


Two of the group, Lenny and Lilly, are the focus of a side story about reconciliation.  Lenny is Lilly’s mother, and from the way they talk they have been estranged for some time.  This story is part of what makes Milligan a great writer in my eyes.  The conversations they have remind me of conversations I had with my own father when I was finally getting my chance to move on from previous and unwarranted hatred of him.  The conversations feel real between the two.


The main story though focus’ on Shade trying to protect his girlfriend and unborn child.  The angels start to fight dirty to get their hands on the child.  Even going so far as possessing Shade and trying to get him to kill his girlfriend and cut the baby from her belly for them.  After the failed attempt to get Shade to kill Kathy, Shade goes to the devil thinking he can be trusted.  But lets face it, no deal with the devil is what it seems.  Shade’s deal goes sideways as you would expect and Kathy pays the price.  Their baby is made a new “ally” to the devil and Kathy dies.


Even though there are multiple artists on this book, the art is beautiful.  And it transitions between styles flawlessly.  Only showing true style change when Shade’s madness gets more out of control.


My verdict on this issue is that it shows why Milligan’s Shade run is so highly praised by those who read it.  Another strong issue from one of my favorite lesser known writers.

Thanks for reading and I hope it helps to introduce more people to other interesting titles.  If you have any comments or suggestions please post them on this review.
Posted by Unknown at 9:37 AM