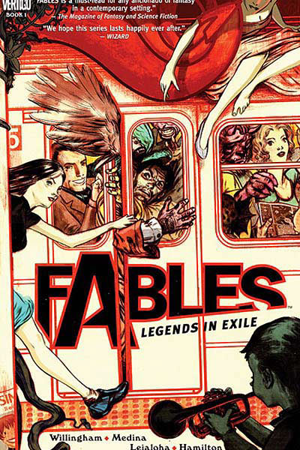 The Story:
All of the major characters from Fairy tales and Folklore  are driven from their homelands by an army of evil lead by “The Adversary”.  With nowhere left to turn they escape to New York, where they create their own community and government.  They are just biding their time till they can find a way of taking back their homes.  I feel the first arc wouldn’t make for a very good representation of what Fables is on it’s own.  So the first two arcs should be combined to move the story.  Or maybe even cover most of the first arc through flashback and conversation.


The Director:
This one is tough.  The comics have a good mix of humor, action, and drama.  I think Jon Favreu could take this series and really give it a good life on the big screen.  The proof is in his take on Iron Man.  He made a movie that was full of action and comedy, but also ripped your heart out with emotional points that made strong moral statements.

Snow White:
The second in command in the Fabletown government, Snow actually runs most of the day to days.  She is a strong female character with family issues and a very short temper when the dwarves are mentioned.  She is also often mentioned as being one of the greatest beauties in all of Fabletown.  I would like to see Natalie Portman get this one.  She is classically beautiful and is one hell of an actress.  I think she could really bring the authority needed to make Snow White the strong character she is.

Bigby Wolf:
The sheriff of Fabletown and former Big Bad Wolf of legend.  He has a thing for Snow White and isn’t afraid of anybody.  He is able to transform into a giant wolf at will, but mostly walks the street looking like a scruffy guy in a trench coat always smoking a cigarette.  Hugh Jackman is the easy pick on this, because the character is drawn so closely to Wolverine.  But I think the fact that he is already Wolverine is exactly why he shouldn’t be Bigby.  I favor Karl Urban.  He has shown a lot of range in his career, but it is his Dredd performance that shows why he could be a great Bigby.  Plus I prefer the idea of Bigby using a less bulky frame for a human shell. Less assuming, yet still imposing.

Prince Charming:
This interpretation of Charming is really far from the Disney version most people grow up with.  Prince Charming is basically a grifter who uses his looks to reel in attractive women so he can mooch off them till they have nothing left.  At which point he moves on to find his next “meal ticket”.  Charming has been married to several of the main women of the Fabletown community, and all of them still hate him.  I always pictured Christian Bale as Prince Charming.  All of the attributes of Charming are shown in his roles as Patrick Bateman and his version of Bruce Wayne when he is pretending to be the billionaire playboy everybody needs to believe he is.  I also feel Bale could really bring a lot to the turns in Charming’s story as the series goes on.

Rose Red:
Snow White’s troublesome little sister who never really appreciated that everyone knows her sister but not her.  Red goes out of her way to make Snow’s life miserable every chance she gets.  The first arc of Fables focuses on the investigation of Rose Red’s murder.  Even despite that Red plays a big part for the rest of the series.  She even becomes a character that you start to root for by the third or fourth arc of the books.  I would lean towards Emma Roberts for Rose Red.  Roberts has shown a great ability to play the rebellious type, and that is what we need.  plus she has the looks to be believable as the attractive younger sister who tends to try to seduce Snow White’s boyfriends/Husbands.  She stole the movie We’re the Millers with her part as the rough around the edges runaway hired to play Jason Sedakis’ daughter.  And while I wasn’t a huge fan of the movie itself Roberts stood in Scream 4 playing Sydney’s cousin.

Jack of Fables:
Jack is a con man who is always planning his next big scam.  He is known for having a rather bumpy relationship with Rose Red.  Jack is “The Jack” of all the famous tales.  Hunter Parish would be great for this part.  He was great as the oldest son on Weeds, and I feel that part prepped him perfectly for playing the con man Jack.

King Cole:
King Cole is the figurehead of the Fabletown government in Face only.  Snow truly runs everything.  Cole just gets to do the glad handing and what not when there is a big celebration or party to attend.  He is rather meek until the situation demands him to step up and do his part in the battle.   I could see John Goodman playing King Cole, although he is a lot taller than how he is drawn in the comic.  Goodman could be really fun in this part, and I would like to see him play a fussy former ruler who really has no leadership qualities.

Flycatcher:
The former frog prince and  janitor of the Woodland apartment building, Flycatcher is constantly in trouble with Bigby for not hiding his old tendencies and eating flies.  Catcher eventually becomes a large part and even leads the charge to take back the homelands where he becomes a king.  I would cast Rupert Grint for this.  He could play the goofy side of Flycatcher really well.  But I would like to see him get to show his acting talents when it comes time for the more dramatic moments.

Boy Blue:
Blue is the assistant to Snow White and rooms with Flycatcher and Pinocchio.  A lot of Fables look right passed Blue, but few know that he was one of the major heroes of the final exit from the Homelands.  I think Anton Yelchin could really take this character and make it shine.  I’ve liked most of his parts so far.  Especially Chekov, even if they did play up the accent a little too much.  He would need to have blonde hair for this role, but I don’t think that would be a bad look for him.


That wraps up this edition of Comic Book Fan Casting.  I know there are a lot more characters to this book,  and there are many that would only be CGI and voice cast.  But I am not going to cast them all.  As always if you have any comments on my casting choices or suggestions for future installments of Comic Book Fan Casting feel free to post them here.
Posted by Unknown at 2:01 PM